The story of Sufiyan, his art, his family and village is as interesting as it has been challenging, but one which shows the true grit and determination of these artisans who claim to be carrying on an art form that finds its origins in the Indus Valley Civilisation. 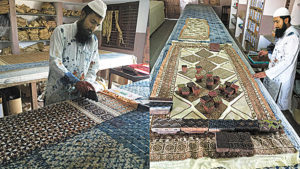 In 1634, the King of Kutch, Raja Bharmal I, invited members of the Khatri community from Sindh to settle in the Kutch region, so that printed fabrics manufactured by the Khatris could be worn exclusively by the royal family. Ten generations and 382 years later, a member of the same family, 33-year-old Sufiyan Khatri, now heads a small entrepreneurial setup in Ajrakhpur, Kutch, and helps provide employment to nearly 50 people in the village.
The story of Sufiyan, his art, his family and village is as interesting as it has been challenging, but one which shows the true grit and determination of these artisans who claim to be carrying on an art form that finds its origins in the Indus Valley Civilisation.
Ajrakh – a unique technique in hand block printing, literally means ‘Aaj Rakh’ (‘Keep it today’). However, according to Sufiyan, the simplicity ends here: the process is complex as it often involves up to 16 steps, depending upon how many colors and layers of block print are desired.
Chemical Dyes Over Natural Dyes
Until the early half of the 20th century, Sufiyan says the market for these prints remained mostly local, as almost all Sindhis and other locals wore these prints. However, around the time of India’s independence, the market for these clothes started shrinking as locals started preferring Western clothes. Around the end of 1950s, as cheap chemical dyes made a foray into the market, production of natural dyes came to a halt for about 15 years. As a result, a number of local artisans shifted to chemical dyes over natural dyes.
Sufiyan’s grandfather Mohammad Siddique Khatri also shifted to chemical dyes, but ensured that his three sons, one of whom was Dr. Ismail Khatri, learnt the traditional method of using natural dyes in Ajrakh printing.
The family of Sufiyan had settled in a village called Dhamadka, mainly because of the proximity of the Saran river to this village. “Water is an essential ingredient of the Ajrakh process because it constitutes an important part of the natural dyeing process. We also need good quality of water, otherwise all efforts can go to waste,” said Sufiyan.
Setback in 2001
The devastating earthquake in 2001 destroyed all the infrastructure for the artisans. Not only this, more than 100 people in the Khatri community lost their lives, and for the next few years, life was extremely tough for the village. “The water in the river Saran became unusable after the earthquake as the mineral content of the water became too high. Also, as our village was completely destroyed, we had no option but to move,” says Sufiyan, who was still in his teens at that time and had already started working with his father. They found a vacant area, 40 kms away and the entire community of Khatris came together to buy about 100 acres of land. The new village, fittingly, was named Ajrakhpur after the art form. The village was also thankful to Jamiat e-Ulema-e Hind who helped them build their homes, along with donations from Western clients which helped them rebuild their workshops. But most importantly, the water in the area was deemed good enough for work to resume.
Today, thanks to the use to social media and the Internet, Sufiyan and his village of artisans have earned worldwide fame. His clients include people in India, along with thousands of buyers in international markets. In July, Sufiyan visited Europe for a trade exhibition, and has already travelled all of India for hundreds of exhibitions and shows. According to him, on an average the artisans in the village, both male and female manage to get work for about 10 months a year. “In my company, I directly employ about 40 people, while several others earn money by supplying goods, colours, clothes to us. Even the lowest-earning artisan makes up to Rs 1,000 a day, so we can proudly say that no one in this village has to ever face poverty,” says Sufiyan. He says this is also the main reason why there is almost zero migration from the village to the cities, as people are happy and content with the work they do, along with being a part of a larger family. Sufiyan also conducts training workshops for a number of people and says that going forward, his dream is to ensure that the entire village continues to benefit from this art form. “There is something amazing in living in such a family. I would never trade this for anything else,” he says.
(Extracted from twocircles.net)

August 14, 2017
Around 50 students from different schools of downtown Srinagar, artists from Cultural Academy and other artists, had put... More
Prev Post Whither Black Money?
Next Post People

Repel Evil with What is Good!