Fr. Bob’s reflections on interfaith relations, drawing on his immensely rich experiences of living among Bangladeshi Muslims over several decades, are immensely useful. 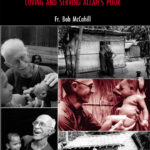 This is one of the most inspiring books I’ve ever read—and it’s about a truly inspiring person: a Catholic priest born in the USA who has spent more than 40 years serving the poor and the sick in Bangladesh, where, even now, at the age of 81, he continues to live.
Born in 1937, Bob McCahill’s dreams as a child changed over the years—at one time he wanted to become a cartoonist, at another time a pilot and still later an archaeologist. But at the age of 19, on 31st October 1956, he was struck by the inspiration to become a Catholic priest!
In pursuance of his calling, Bob  joined the Maryknoll Mission Society, the Catholic Foreign Mission Society of America, being ordained as a priest at the age of 26. After serving in the Philippines for some years, he landed in Bangladesh.

Service to the Sick-Poor
Since 1976, Fr. Bob has been sending a letter  to his friends in the USA and other countries always on 31stOctober, the day he was given a lifelong motivation to do what he regarded as God’s will for him. This book is a collection of 42 letters, from 1976 to 2017. The theme of these letters is basically one: highlighting how Fr. Bob seeks to lead a life of love of and service to the sick-poor, inspired by Jesus, his model, among the people of Bangladesh, finding them, as he puts it, “to be persons of faith, worthy of Christian respect and praise.”
Over all these many years in Bangladesh, shifting from one small town to the other and venturing into the countryside on his bicycle, Fr. Bob has sought to live like and among the poor, adopting a life of austere simplicity. Wherever he goes, he tries to make himself useful to the people he meets, befriending them, sharing in their joys and sorrows and looking for ways to bring a smile to their faces. Helping them access medical treatment is one particular thing that he focuses on.

Lifestyle of Simplicity
Fr. Bob’s  example, as emerges from the letters, provides useful insights that can help us make our own lives more meaningful. We learn from him that simply preaching the virtues of one’s faith is one thing, but living out those virtues oneself is quite another. His life reminds us that we can’t grow spiritually without love and concern for the poor. His lifestyle of simplicity and voluntary poverty, emulating that of the people among whom he lives, is another great life-lesson.
Fr. Bob also provides us valuable guidance with regard to the ethics of interfaith interaction—something of enormous contemporary relevance. He is a wonderful example of how religious pluralism can become a great blessing for our own inner growth: we can gain immensely as individuals through interacting with and learning from people of diverse faith backgrounds and from a respectful appreciation of their religious traditions.
In the context of a long history of conflictual relations between Christians and Muslims in many parts of the world down the centuries, Fr. Bob’s reflections on interfaith relations, drawing on his immensely rich experiences of living among Bangladeshi Muslims over several decades, are immensely useful. He has some very practical suggestions to offer in this regard. Noting that many Muslims continue to harbour negative feelings about Christians on account of the Crusades and European colonialism, Fr. Bob suggests that Christians should reach out to Muslims and help alter their perceptions by sincere concern for their welfare (such as in the fields of health and education and working together for social reform). “As we learn to serve one another—we to serve Muslims and they to serve Christians—we get a glimpse of paradise”, he believes.

Muslims’ Suspicions
Fr. Bob notes many Muslims’ suspicions that Christian missionaries serve the poor simply to convert them to Christianity. “Sad to say, there is some basis in fact—both historical and current—for that perception”, he writes. The most effective remedy for this Muslim perception, he says, is for Christian missionaries to give up conversion as the purpose of mission. Noting that the Church “is pleading for Christians and Muslims to work together”, he rightly observes that “we and they can only work together enduringly with persons we trust” and explains that “Muslims cannot trust missionaries among them unless the missionaries plainly exclude the intention to make converts.”
Fr. Bob’s own example provides valuable lessons on how both Muslims and Christians (both of whose religions are missionary) could rethink their approach to religious conversion and to interfaith relations more generally. What is important is the sort of life people lead, inspired by their faith, and not mere verbal proclamation of one’s religion, he seems to suggest. Important also is the need to respect and appreciate the goodness in other religions.
This book—outpourings from the heart of an inspired man—is a real treasure, providing valuable lessons in practical living for individuals as well as for entire communities, such as Muslims and Christians, who just have to learn to live together more harmoniously, for their own good and that of the rest of the world.

January 27, 2020
Reviewed by Qalamdar Name of the Book: Talaash: A Search for the True Meaning of Life Author: AiR (Atman in Ravi) Publis... More
Prev Post Jame Masjid Library - A Treasure Trove of Wisdom
Next Post Catholics to provide burial spaces for Muslims