The three principal sultanates immeasurably enriched the life and culture of the regions, contiguous to three modern states of Karnataka, Telengana and Maharashtra. 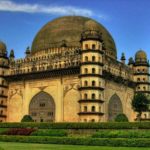 The five Sultanates of Deccan left their huge imprint on the art, architecture, hydraulics, culture and ethos of regions that make parts of modern linguistic states of Karnataka, Telengana and Maharashtra today. Deccani Urdu that forms lingua franca of Muslims and the bazaars of these regions, is one among its manifestation. But at a more tangible level, the monuments, gardens, and water distribution system point to a much deeper engagement with the life and development of the people.

Successor States
Author Helen Philon has painstakingly documented the remnants of architectural landmarks of the era that spanned nearly six centuries beginning from the founding of the Bahmani Kingdom in 1345 by Alauddin Bahman Shah in Gulbarga. It was Mohammad bin Tughlaq who had developed Devagiri as co-capital of the Delhi sultantate in the Deccan. But his return to Delhi in 1327 prompted the local governors to declare Independence, resulting in the simultaneous birth of two great Deccan powers: the Hindu kingdom of Vijayanagar, founded in 1336 and the Muslim Bahmani kingdom founded in 1345 with successive capitals at Daulatabad (1347-50), Gulbarga (1350-1430) and Bidar (1430-1520). These kingdoms had their sway over coastal regions which enabled them to import ideas, talent, skills and material from far off lands such as Anatolia (in Modern Turkey), Iran, Egypt and beyond.
The Deccan Sultans built cities and cantonments; raised gardens and orchards; exploited waters of Krishna-Godavari doab; laid canals and sprinkling system; introduced qanats (aqueducts); set up learning centres; promoted artisanship in the field of metallurgy, weapon-making, weaving, and embroidery; and brought in pleasing elements in architecture like domes, iwans, chhattris, pavilions and pools.

Delving Deeper
Like their northern counterparts (the mighty Mughals and the preceding six Muslim dynasties), they were plagued with court intrigues and assassination; engaged in conflicts and mutual wars; employed devious ways to uproot others; made friends and foes regardless of religious affiliations; got proximate to or distanced from saints and sufis of their liking; and, carried on the affairs of the State as dictated by their whims and fancies with public interest thrown in. The book however delves deep into the architectural style of the monuments that dot the three principal cities of Bidar, Gulbarga (now Kalburgi) and Bijapur (now rechristened Vijayapura).

Interactions
Even as they imported hydraulic technologies from Iran and beyond, they cultivated contacts with the local Hindu folk. Firuz Shah (1397-1422) was the first Deccan Sultan to marry the daughter of a Hindu raja; in this case, the ruler of Vijayanagara, thereby promoting a dialogue between imported and local traditions, and initiating the composite culture that came to typify the region. Ahmad Shah Bahmani (1422-1436) however, remains the only sultan in the Deccan to be venerated both by Muslims and Hindus, as evidenced to this day during his urs at Ashtur on the outskirts of Bidar, at which the officiating head of the Lingayats performs the main rituals. Nauraspur, the incomplete and abandoned city, was also the outcome of the synthesis attempted by the visionary sultan Ibrahim Adil Shah II (1587-1622) who wanted to entwine two most popular devotional cults i.e., the Dattatreya saint Narasimha Sarasvati and that of the Khaja Bandanawz Gisudaraz of the Chishtiya order.
The book highlights the lesser known cities such as Nimatabad, Kumathgi, Holkunda, Firuzpur, Kamthana, Ainapur dotted with royal cemeteries and other archaeological assets. Photographs by Clare Arni capture the aesthetics in detail and greatly enhance the value of the book while diagrams and maps obtained from the British Museum, London, elucidate understanding of the topography of the cities. This exquisitely produced volume is not only worth reading, but worth preserving too. The book provides guidance to the visitors who would like to explore the splendor of the bygone era. It is mildly critical of the archaeological restoration work which in certain cases has obliterated the originality of the structure. The book seems to be the outcome of the new interest being evinced in the Deccan architecture following formation of the Deccan Heritage Society.

January 27, 2020
Reviewed by Qalamdar Name of the Book: Talaash: A Search for the True Meaning of Life Author: AiR (Atman in Ravi) Publis... More
Prev Post Reflecting Pain and Joy of an Inspiring Spiritual Seeker
Next Post NEW ARRIVALS