Little Book with Loads of Wisdom

Abu Sa’id al Kharraz was a ninth century Muslim mystic whose Kitab al-Sidq is a widely known Sufi treatise, popularised in the English speaking world chiefly through its translation by Arthur John Arberry. The importance of this treatise lies in the fact that it is the earliest systematic presentation of the theory of Sufi experience written by a practising Sufi. This insightful and deeply inspiring work has had innumerable prints and critical editions ever since it appeared in translation in 1937. The Calicut-based publishing house Other Books deserves kudos for bringing brought out this Indian edition of Arberry’s translation.
Al-Kharraz was one of the best known of the Baghdad school of Sufis which flourished in the 9th century. Little is known of his actual life. This text now is the sole surviving work of al-Kharazz, although considerable fragments of his sayings and writings are preserved in the various Sufi compendia.
Beginning with the idea of sidq or truthfulness, the author develops his theme to include the ‘stations’ of fear, hope, trust, love, shame, longing and intimacy, all of which the mystic must pass on his path to God. The constant insistence on the experience of the prophets and men of piety is most remarkable.
The book is small in size and handy to carry. The language in the initial chapters may seem tough for some, but gradually as one goes deep into the book, the essence unfolds. It is a useful read for lovers of the wisdom of the Sufis that is so much needed in today’s fragmented, disturbed world. 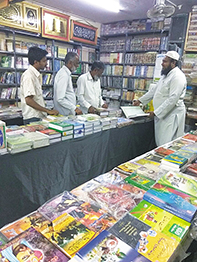