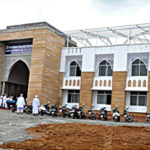 Bhatkal: The Anjuman Hami-e-Muslimeen’s Women’s Degree College shifted to its newly constructed building in Khatija Complex on March 18. It is located near the Shamsuddin circle. The building was funded by Janab Syed M. Khaleel, the Dubai based chartered accountant and former President of the Anjuman Hami-e-Muslimeen.
The new building is located within the Bhatkal town and is equipped with lecture halls, administrative block, laboratory, library and computer centre. According to Mr. Jukaku Abdur Raheem, General Secretary of the Anjuman, the college currently has 450 girls pursuing BA, B.Sc and B.Com courses.
Mgt. Info. System: Anjuman Engineering College launched its Management Information System (MIS) during the last academic session enabling parents of the enrolled students to access the performance, attendance and general conducts of their wards. The Engineering college has around 700 students.
New Admn. Offices
Anjuman Administrative Office which was housed in the old IAU High School building so far has been shifted to Anjuman’s New Jukaku Shamsuddin Memorial Administrative Building at Anjuman Abaad, Bhatkal. This new building was officially inaugurated on July 17th, 2016, by Mr. Deshpande, Karnataka Minister for Medium and Heavy Industries.
The new Administrative building with a built up area of about 13,000 sq.ft. has separate cabins for President, two Vice Presidents, General Secretary and all other eight office bearers. Separate conference halls for Office Bearers Meeting, Executive Committee Conference Room and Annual General Body Meeting hall has been provided. It has been equipped with new furniture and workstations for office staff and separate waiting rooms for women and men. It has ground floor and first floor to take care for future expansion of Anjuman’ activities. 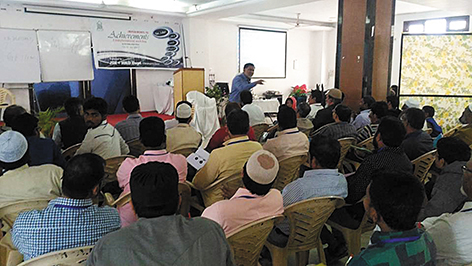