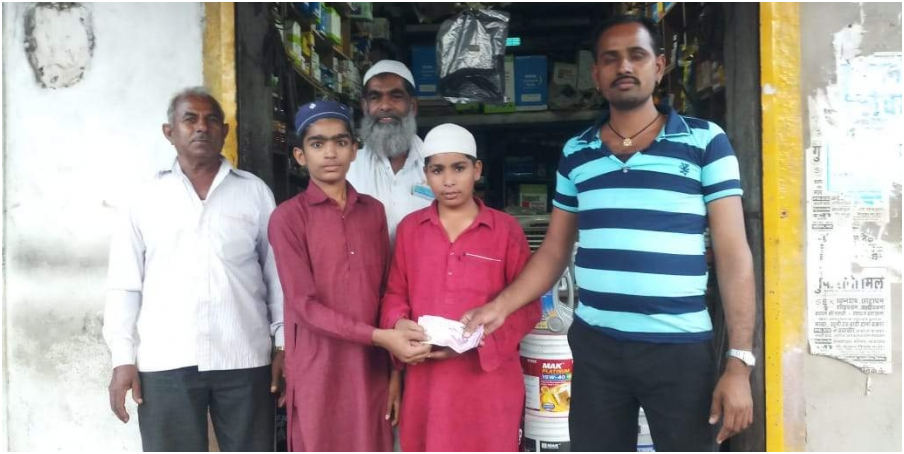 By Rajesh Asnani
Express News Service
JAIPUR: At a time when faith in human goodness is quickly eroding, an act of honesty by two school-going boys gives hope that morality and ethics still shine in Indian society. Inspired by their grandfather’s teachings on honesty, two Muslim boys showed an exemplary zeal to find the real owner of a lost bundle of notes that they found on a road.
Two 13-year-old Muslim cousins, Abdul Majid and Abdul Qadir, from Bilara tehsil in Rajasthan’s Jodhpur district had gone to the market to buy a mobile sim card when they found cash worth Rs 15,500 lying on the road near a petrol pump.
Though it was a huge amount for them in view of their financial status, the boys were not lured into any mischief but instead went straight to their grandfather Fakir Mohammed who had always taught the children to be upright and honest in their lives. Fakir, who works as a rag picker, heard the story from his two grandsons and immediately set out with them to find out the rightful owner of the money.
Heading straight to the place where the bundle of money was found, the three came to know, after several enquiries from nearby shopkeepers, that one Mishri Lal Gurjar had come looking for the money and had left his number with a mobile store.
It was only after Gurjar came and established his credentials by giving the denominations of the notes lost, the amount was duly returned to him.
As Fakir Mohammed says, “I was scared that we might give it to some wrong person then how will we give the money to the right owner. Which is why I asked him about the notes and amount. When he answered correctly, we confirmed that he was the real owner.”
Fakir was delighted that despite their poverty and tender age, his grandchildren have stuck to the honest path that he has guided them towards “These kids live with me and I have always taught them not to lie and to live honestly. I am happy that they have adhered to my teachings practically,” he said.
As per Gujrar, he had come to purchase feed for his cattle but probably dropped the amount while taking out his mobile from his pocket.
While he had given up hopes of recovering the money, he saw the good deed of the youngsters at the behest of their grandfather, following which he happily gave Rs 500 to the young boys for sweets and merriment as his token of appreciation and thanks. “Though I stopped him he insisted saying that for such honest kids even Rs 5000 is less. If it had been some other kids , they would have just happily distributed it among themselves,” Fakir said.
(Extracted from newindianexpress.com)