The report focusses on assessment of grassroots level ground realities of development. 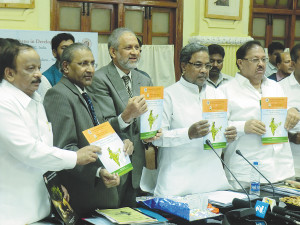 Bengaluru: The Report on ‘District Development and Diversity Index’ prepared by veteran economist Dr. Abusaleh Shariff was released here by Karnataka Chief Minister Siddramiah on January 23, at Vidhana Soudha. The report has been published by US-India Policy Institute and Centre for Research and Debates in Development Policy (CRDDP) based at Washington DC.
While releasing the Report, Mr. Siddramiah said the State Government would seriously and carefully examine the establishment of Equal Opportunities Commission (EOC). Referring to the Report’s content on weaker conditions of the Socio-religious communities (SRCs), the chief minister pointed out that Karnataka will begin survey of caste and communities in the State from April 11 with the help of 1.5 lakh field surveyors at the cost of Rs. 175 crores. He said the survey was the first of its kind in the State after the 1931 Caste Survey done in the old Mysore state. He said it is aimed at taking the Government welfare schemes to the really deserving people in the OBC, scheduled caste, scheduled tribes and minority communities. He pointed out that deserving recipients will be identified on the basis of ground level statistics.
Dr. Shariff who was the chief author of the Sachar Committee Report, said the Sachar Report was the first document in Independent India to know the situation of Muslims academically. He said now it has become imperative to assess the reach and effectiveness of Government welfare programmes at the lower level of administration, hence the need for District Development and Diversity Index (acronymed DDDIx).
He pointed out that the DDDIx by the US-India Policy Institute (USIPI) and CRDDP have extracted a number of socio-economic and human development indicators from nationally representative surveys for all districts of India. The composite index consists of four dimensions i.e., economic, enabling material wellbeing assets, education and health. The results have been compiled in the form of annotated maps, graphs and figures for convenient use.
Highest & Lowest on the Index
The Report, for example, puts the Development Index for North Delhi at 0.69 (topmost) while Araria district in Bihar stands at 0.16. Explaining this, he said, it means that Araria has no enabling economic environment which can support development while North Delhi still has scope for more development. The data has thus been compiled for 600 districts in India.
Dr. Shariff said the DDDIx is much more than the Sachar Report in that it is a more technically advanced tool in assessment of grassroots level ground realities of development through creating indices for easy comparison at a more granular level. The analysis further proceeds to add the dimension of diversity to district development estimates and compares as to how each socio-religious community is placed in a relative context. He said the DDDIx will identify pathways linking the communities with governance.
Salient Features of the DDDIx
It is anchored on 17 of the 27 development and livelihood measuring variables drawn from survey by reputed and Govt-support national sample survey.
It provides an index or rating for four dimensions and one composite index for every district in India.
It makes it possible to create a district level ‘management information and evaluation system’ for each of the components of the developments
It facilitates use of data by international agencies such as the UNO, World Bank, the Asian Development Bank and Foreign Direct Investors.
Indicators for Analysis
The Analysis has chosen the following indicators under the four heads:
Economic Development: 1-Monthly per capita income in Rupees, 2-Percent of people above poverty line, 3-Percent households having regular salary earner members.
Material well-being Index: 1-average of asset index score at household level, 2-percentage of households using LPG as primary source of cooking, 3-Percentage of households using electricity as primary source of lighting.
Educational Development: Percentage of female literates (7 plus years), 2-Percentage of adult literates (18 plus years), 3-Percentage of Matric pass (15 plus population), and 4-Annual average household expenditure on education.
Health Index: 1-Percentage of currently married women who were more than 18 at the time of marriage, 2-Percent of currently married women who received post-natal care within 48 hours of giving birth to a child, 3-Percentage of fully immunized last and last but one children (aged 12-23 months), 4-Percentage of currently married women using any contraceptive aid, 5-Percentage of currently married women years who are aware of HIV/AIDs.
Mr. Syed Zameer Pasha, IAS(Retd), executive director, CRDDP, who welcomed the participants and concluded the programme, urged that the Equal Opportunity Commission should not be created under the Ministry of Minorities Welfare as it is meant to address the issue of discrimination or lack of access to public space or facilities to all communities.

November 15, 2018
The court’s decision comes after an Austrian national  held two seminars in 2009, in which she defamed the holy Prophet.... More
Prev Post Obituary - B.S.A. Abdur Rahman
Next Post IINA Report on Literacy - 40% of Muslim World’s Population is Illiterate