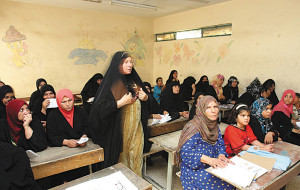 Jeddah: Illiteracy is stunningly rampant in the Muslim world. Nearly 40 percent, (with varying percentages in the Member States of the Organization of Islamic Cooperation) of the Muslim world’s population cannot read or write, which means that there are hundreds of millions of illiterates in the OIC countries, mostly female, according to a report prepared by OIC and obtained by the International Islamic News Agency (IINA), last month.
The report showed that adult literacy rate in the OIC countries is roughly 73 percent, lower than the global adult literacy rate (82 percent), and the rate of other developing countries (85 percent), based on 2013 statistics.
The Islamic Educational, Scientific and Cultural Organization (ISESCO) stated that illiteracy rates in the Muslim world ranges between 40 percent among males and 65 percent among females, with rural areas lagging behind urban areas by over 10 percent. This poses a threat to the development and prosperity of the society and negatively impacts on the ability to promote and build a strong growing economy and achieve the Millennium Development Goals (MDGs).
In the same context, it was expected that the number of illiterate adults in the world to slightly drop from 774 million in 2011 to 743 million in 2015 (a large proportion of them in the Muslim world), according to a report released by the United Nations Educational, Scientific and Cultural Organization (UNESCO).
The report showed that five of the OIC Member States were included in the 2011’s list of the 10 countries that together make 72 percent of the world’s total number of illiterate adults, 160 million of them are residents of these five countries. This is in addition to tens of millions of illiterate Muslims in OIC non-member countries, included in the list.
According to the second OIC 10-year plan (2015-2025), the adult literacy rate is an indication of the educational system effectiveness, since it measures the quality of education, particularly the ability to read and write. The report noted that despite the efforts deployed at both the government and civil society levels, a small number of OIC countries were able to either wipe out illiteracy or reduce it to lower rates.
According to UNESCO data, the number of illiterates in the Arab countries – all of them OIC members – dropped from 52 to 48 million people during the period from 2005 to 2011, recording the fastest growth rates in literacy among adults since 1990.
South and West Asia ranked second in terms of high rates of adult literacy, having the number of illiterate adults remained unchanged just over 400 million people, while in the sub-Saharan Africa, the illiteracy rate among adults has increased by 37 percent since 1990, reaching 182 million people in 2011.
In the area of gender parity, the report indicated that 30 countries, involving OIC members, out of 61 countries for which data are available, are expected to achieve gender parity in terms of adult literacy by 2015, despite the lack of any progress towards reducing the proportion of illiterate women since 1990, which constitutes two-thirds of the total number of illiterate adults.
Literacy indicators are still not encouraging, given the fact that there are still 57 million children (many of them in the Muslim world) out of school worldwide, a matter which will constitute a growing burden of illiteracy rates in the long run.
ISESCO Director General Dr. Abdulaziz al-Tuwaijri said in previous statements that “Illiteracy still poses a real challenge to the Muslim communities and impedes Muslim world’s advancement in all aspects,” pointing out that “Illiteracy in most OIC Member States has reached serious levels, reflected negatively on the efforts of the governments to achieve sustainable development”.