U.S. Muslims Concerned About Their Place in Society, but Continue to Believe in the American Dream 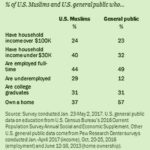 Yet for most American Muslims, these problems only partially define their personal experiences in the U.S. Four-in-five say they are satisfied with the way things are going in their lives, and 84% categorize Americans in general as “friendly” (55%) or “neutral” (30%) toward U.S. Muslims. About nine-in-ten (92%) say they are proud to be American.
These findings come from Pew Research Center’s new survey of 1,001 U.S. Muslim adults, conducted Jan. 23 to May 2, 2017. The poll follows earlier Pew Research Center surveys of American Muslims in 2007 and 2011.
The new survey indicates that the U.S. Muslim community is facing numerous challenges. Three-quarters (75%) of Muslim respondents, for example, say there is “a lot” of discrimination against Muslims in the U.S. (a view shared by 69% of Americans in general). Muslim women are more likely than Muslim men to hold this view (83% versus 68%).
Asked to describe, in their own words, the most important problems facing Muslims today, 23% of U.S. Muslims mentioned discrimination, racism or prejudice. Meanwhile, 13% point to ignorance or misconceptions about Islam, 10% mention views of Muslims as terrorists, 9% mention negative media portrayals in general, and 9% mention President Donald Trump’s attitudes and/or policies toward Muslims. About one-in-ten (9%) identify no problems.
Muslims also were asked whether they had experienced specific types of discrimination over the previous 12 months. About one-third (32%) say that others have acted suspicious because they are Muslim, one-fifth say they had been called offensive names, and 18% say airport security had singled them out. One-in-ten (10%) say they had been singled out by other law enforcement officers and 6% say they have been physically threatened or attacked. Overall, 48% of respondents say at least one of these things happened to them in the 12 months prior to the survey, slightly higher than the 40% of respondents who said the same in 2007. Women (26%) are more likely than men (13%) in this year’s survey to say they have been called offensive names.
Meanwhile, most Muslims (62%) say Americans do not view Islam as part of mainstream American society. In fact, a plurality of U.S. adults (50%) say they don’t see Islam as part of mainstream society. Most U.S. Muslims also say the American media is biased against them, with six-in-ten saying coverage of Islam and Muslims by American news organization is “unfair.”
Along with their concerns, U.S. Muslims also report a host of positive feelings about life in the U.S. Even as most say that Americans do not view Islam as mainstream, for example, majorities of U.S. Muslims (60%) say they have “a lot” in common with most Americans, and that they can get ahead through hard work (70%) – a belief that is a key component of the so-called American dream.
U.S. Muslims also appear to be more socially integrated with non-Muslims than they were a decade ago. About one-third (36%) of U.S. Muslims say that all or most of their friends are Muslim, down from 47% who said that in 2007. Many report positive interactions with non-Muslims by another measure, as well: 49% say that someone expressed support for them because they are Muslim in the 12 months prior to the survey, up from 32% who said this in 2007.
In many ways, American Muslims are also well integrated into the socioeconomic fabric of their country. They are as likely (24%) as the general population (23%) to live in households with $100,000 or more in income, as likely as U.S. adults to be college graduates (31% each), and roughly as likely (44%) as the general population (49%) to be employed full time.
At the same time, they are considerably less likely (37%) than the general population to own a home (57%), and more likely (40%) than Americans in general (32%) to have annual household incomes under $30,000. They also are more likely (29%) than the general population (12%) to be underemployed, meaning that they are employed part-time, but would prefer full-time work, or they are unemployed but looking for work.
(Jeff Diamant is a senior writer/editor focusing on religion at Pew Research Center).

November 15, 2018
The court’s decision comes after an Austrian national  held two seminars in 2009, in which she defamed the holy Prophet.... More
Prev Post Nitish’s Somersault - About-turn in Bihar
Next Post Bookstore on Wheels in Baghdad