Sunny and Specs, the Spider 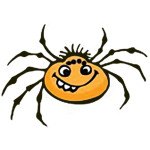 By Nigar
Sunny lives in Pinewood Cottage in Shimla, a hill-station high up in the Himalayas. He is a very adventurous little boy and loves meeting furry and feathery creatures. Every afternoon, when he’s back from school, he goes for a long walk in the woods looking out for pretty birds and insects. He even chatters with them as they hop about searching for food.
One fine summer morning Sunny woke up, rubbed his eyes, saw the sunbeams streaming into his room and bounced out of his bed. “Wuppy!” he exclaimed to himself, “What a wonderful day! I’m sure something wonderful is going to happen.” Off he skipped to the bathroom to get ready. He was humming his favourite bumble-bee song while brushing his teeth when, all of a sudden, he spotted a hairy, long-legged creature, with giant red spots on its back, sitting high up on the wall.
Sunny got the fright of his life. His toothbrush dropped out of his mouth! While he stared dumbstruck at the creature, for he had never seen anything quite like it before, it turned up to him and said in a rather jolly voice, “Hi there! I’m Specs, the spotted spider. I admit I look rather unusual but don’t be afraid of me. By the way, what’s your name?”
Sunny introduced himself hesitatingly, and then asked, “But what are you doing here, in my bathroom”?
Specs took off the pair of his glasses that he wore on his nose and peered closely at Sunny. “My, you do seem such a dear little boy!” it cried. “Can we be friends? Please!”
As you can well imagine, Sunny was frightened out of his wits by the talkative creepy-crawly. Mustering all the courage that he had, he mumbled, “My mama told me not to talk to strangers, and I don’t know you at all!”
“Oh Sunny, don’t be silly! I’m a harmless little thing. Now you go about with your bath and things and let me prattle on about myself,” replied Specs cheerfully. That set Sunny quite at ease.
Specs climbed onto the bathroom mirror, found a nice, warm corner, snuggled up there with all his many feet about him to keep out the cold and began, telling Sunny all about spiders and their ways. Some spiders could bite and sting, he went on, but he was a harmless sort, he assured him. He spoke all spidery sorts of things, as if reading out from an entry in an encyclopedia. He chattered on about garden spiders and water spiders, about wolf spiders and banana spiders and so many other kinds of spider till Sunny, who was sloshing himself in the bath, was all quite confused.
“Eeew!” cried Sunny, shaking with fear and wishing Specs would stop at once. But Specs continued, for he liked nothing more than to gossip about his fellow spiders. “Don’t worry, dear,” said Specs, taking pity on the poor lad. “Spiders like me are said to be quite useful to people like you because we keep the insect population in check, you see. So, now, will you be my friend?”
Sunny looked up at Specs, quite amazed, and quickly nodded, “Yeah! Sure! Why not?”, though he wasn’t sure that his mother would quite like his new acquaintance. He climbed out of the bathtub and hurried across to the mirror where Specs was squatting to get a closer look at him. For his part, Specs was so overwhelmed that the boy had taken a sudden liking to him (for he had never heard of a boy who liked spiders) that he shot out one of his many hairy arms and curled it around Sunny’s nose in delight.
“This afternoon I have to meet Spooky, the water-spider and my best friend, who lives in the drain below your house. You can come along with me if you like,’, Specs said. ‘We’re setting up a joint web”¦err”¦I mean a website, to tell people that spiders aren’t all the nasty little creatures that they think they are. Do you want to help us?’ he excitedly offered, blinking his eight little eyes all at once.
“Of course!’ the boy beamed. “I’d like nothing more than that!”
And so, that afternoon, when Sunny returned from school, he accompanied Specs down to the drain, where they met up with Spooky and set about making grand plans for the world’s very first spider website! Wasn’t that really amazing fun?