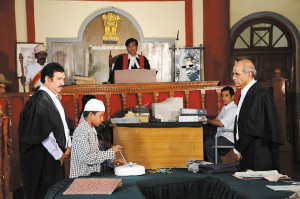 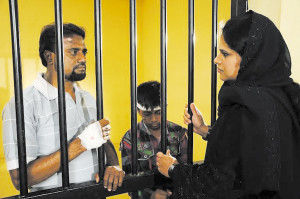 The 15-minute Kannada film with English subtitles is a powerful indictment of the way Indian establishment takes for granted individuals in the Muslims community to be responsible for all acts of terrorism. Deeply ingrained prejudices come into play at all levels. Political bosses exert pressure on police to act fast and innocents are rounded up and tortured into confessing crimes they never committed. Merchants of hate, agent provocateurs and the actual criminals go scot free.
The story revolves round a Muslim businessman, his wife Ayesha and son who exhibits immense scientific talent. The child develops a model of a device capable of recording the conversation on a cellphone for the school science fair. A bomb blast occurs on the City’s main square. As people run helter-skelter, father astride the bike and the child on the pillion who were on the way to the science fair, leave their bike and flee the spot. The police find the device in the debris. A cellphone, a battery and some lose wires are picked up as vital evidences to the crime. The duo is detained and interrogated thoroughly by police who insist that chief minister is pressing the police to arrest the culprit soon.
The media goes gaga with arrest of father and the child in connection with the blast. The duo is asked to confess the crime and the device meant for the science fair is presented as the evidence in the court. Father is pressurized into confessing ‘his crime’ to buy his child’s acquittal.
The case comes up before the court where prosecution presses for conviction of the duo for the terror incident. But as the device is played, even the inadvertently recorded black-mailing by the cop comes to notice, leading to acquittal of the duo. Meanwhile, the trial at the hand of the media leads to stigmatization and social exclusion of the family. The bank which was about to sanction the loan to the businessman refuses to go ahead with the deal. Mothers of students from other communities ask their kids to keep away from the stigmatized child in the school.
The film neatly wraps up the tragedy that afflicts hundreds of Muslim families across the country with stunning effect.
The movie is currently doing the rounds of films festivals. For special viewing contact: Narasimha Panthula, email: [email protected]
(Reviewed by Maqbool Ahmed Siraj)

Distinction from the Optical Society of America