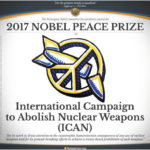 The 2017 Nobel Peace Prize has been awarded to the International Campaign to Abolish Nuclear Weapons (ICAN). The Norwegian Nobel Committee said ICAN was receiving the award for its “work to draw attention to the catastrophic humanitarian consequences of any use of nuclear weapons and for its ground-breaking efforts to achieve a treaty-based prohibition of such weapons.” Nobel committee president Berit Reiss-Andersen praised the work of ICAN at a time when tensions remain high over North Korea’s nuclear weapons testing and as the Iran nuclear deal has been called into question by US President Donald Trump. “Some states are modernizing their nuclear arsenals, and there is a real danger that more countries will try to procure nuclear weapons, as exemplified by North Korea,” Andersen said. “Nuclear weapons pose a constant threat to humanity and all life on earth. Through binding international agreements, the international community has previously adopted prohibitions against land mines, cluster munitions and biological and chemical weapons. Nuclear weapons are even more destructive, but have not yet been made the object of a similar international legal prohibition.”
ICAN, a coalition of non-governmental organizations in 100 countries, said that it was a “great honor” to have been recognized for its role as a driving force behind the United Nations Treaty on the Prohibition of Nuclear Weapons, which was adopted on July 7 with the support of 122 nations.

February 17, 2020
Mia Khan, a resident of Sharana in Afghanistan, has won social media’s respect with his daily routine, which invol... More
Prev Post Detoxifying the Heart! Connecting to Reality!
Next Post A Dargah with a Difference

No Women Leaders? No Peace!

Learnings From Working At An Interfaith Centre