Urbanization – Cities are Home to Over 50% of World’s People 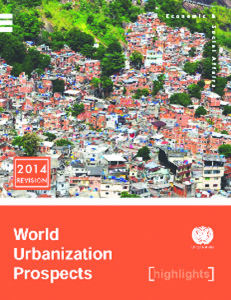 Today, 54% of the world’s population lives in urban areas. By 2050, nearly 66 % of the people will come to live in urban areas. 90%of the increased population will happen in Asia and Africa. Along with the general population increase, this will add 2.5 billion people to the cities.
The latest revised World Urbanization Prospects by the Department of the Economic and Social Affairs (DESA) says that largest urban growth will take place in India, China and Nigeria. They will together account for 37% of the projected growth. By 2050, India will add 404 million urban dwellers, China 292 million and Nigeria 212 million. (All figures pertain to 2011. The reports are published every two years since 1988)
In 1950, the world’s cities had 746 million people. But in 2014, 3.9 billion people live in cities. 53% of the world’s urban population lives in Asian cities. This figure with regard to Europe is 14% and the Latin America 13%.
Between 2011 and 2050, the world population is expected to increase by 2.3 billion, passing from 7.0 billion to 9.3 billion (United Nations, 2011). At the same time, the population living in urban areas is projected to gain 2.6 billion, passing from 3.6 billion in 2011 to 6.3 billion 2050.
78% of the inhabitants of the more developed regions lived in urban areas in 2011, whereas just 47% of those in the less developed regions did so.
In 2011, 23 urban agglomerations qualified as megacities because they had at least 10 million inhabitants. Despite their visibility and dynamism, megacities account for a small though increasing proportion of the world urban population: 9.9% in 2011 and 13.6% in 2025.
This means that the urban areas of the world are expected to absorb all the population growth expected over the next four decades while at the same time drawing in some of the rural population. As a result, the world rural population is projected to start decreasing in about a decade and there will likely be 0.3 billion fewer rural inhabitants in 2050 than today. Population growth will therefore be largely an urban phenomenon.
Rural Population Declining
The world rural population is expected to reach a maximum of 3.4 billion in 2021 and to decline slowly thereafter, to reach 3.05 billion in 2050.
While three in every five people living in urban areas reside in cities smaller than 1 million inhabitants in 2011, this proportion is expected to decline in the future. By 2025, only one person out of two will live in cities of this size. In contrast, cities of 1 million and more inhabitants, accounting for about 40% of the world’s urban population in 2011, are expected to account for 47% of the world’s urban population by 2025.
By 1970, the world had only two megacities: Tokyo and New York. Since then their number has increased markedly and most new megacities have arisen in developing countries. Today, Asia has 13 megacities, Latin America has four, and Africa, Europe and Northern America have two each. Thirteen of those megacities are capitals of their countries. By 2025, when the number of megacities is expected to reach 37, Asia would have gained another nine, Latin America two, and Africa, Europe and Northern America one each.
Between 1970 and 2011, the number of people living in megacities has been multiplied almost 10 times, passing from 39.5 millions to 359.4 millions. It is expected that this number will almost double by 2025 and reach 630 millions.
In 2025, Tokyo is projected to remain the world’s most populous urban agglomeration, with almost 39 million inhabitants, although its population will scarcely increase. It will be followed by Delhi in India with 33 million inhabitants and Shanghai in China with 28.4 million inhabitants. Mumbai in India would come next, with almost 27 million inhabitants.
Urbanisation poses several challenges. First among them is economic disparities inherent in the process which leads to the creation of slums with inaccessibility to the basic civic amenities like potable water, sanitation, roads, power, solid waste collection and schools. Besides social blending necessary for peace and harmonious living, ecological balancing too is necessary for raising sustainable cities. In the words of John Wilmoth, Director of the UN Department of Social and Economic Affairs (DESA) : Managing urban areas has become one of the most important development challenges of the 21st century. Our success or failure in building sustainable cities will be a major factor in the success of the post-2015 UN Development agenda.
This report has been prepared on the basis of UN DESA’s World Urbanization Prospects report released recently.
(Source: http://esa.un.org/unup/pdf/WUP2011_Highlights.pdf)