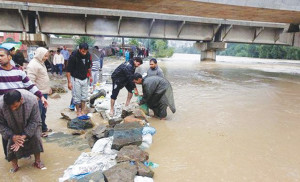 By Muddasir Ali
Srinagar: On September 12, when Srinagar was under flood, an expecting mother from Gujarat found home in a local mosque at Hyderpora on the Srinagar outskirts to give birth to a baby daughter.
Kiran (ray of hope). The newborn, was christened in the mosque by locals after the family from Gujarat, insisted that their “saviors” should name their baby.
Neeta, wife of Kishore from Gujarat was brought to Jamia Masjid Hyderpora, in a critical condition by rescuers from Bemina, one of the worst hit areas by the devastating flood, which killed around 280 people across J&K.
Besides, her husband, Neeta was accompanied by her mother-in-law and two other members of the family.
“Fear was writ on their face and they were desperate to get to some safe place,” said Ghulam Hassan Dar, executive member, relief committee, Hyderpora.
Under trauma, the Gujarat family found comfort in the mosque after they were provided accommodation in the first floor of the religious place. After being served tea and dinner, Kishore, hesitantly, broke news to the relief committee members that his wife’s delivery date was on September 12, the day when the flood had already created devastation in Srinagar, leaving thousands homeless.
The committee members who were already under stress to provide food and shelter to thousands of displaced survivors including outsiders didn’t waste time.
“We immediately rushed her (Neeta) to the nearby nursing home to ensure proper medical treatment for her,” said Bashir Ahmad Paul, another member of the relief committee. At the same time the committee communicated to the hospital authorities that it would bear all charges for the medical treatment of Neeta.
At the hospital the doctors, after attending to Neeta, advised her husband to bring her next day (September 13). Neeta was taken back to the Masjid and provided care under the guidance of local females.
“We kept a vehicle ready to ferry the expecting lady to the hospital for check up during night,” said Paul. The vehicle was owned by Dar’s son Touseef Ahmad.
On September 13, Neeta after night stay at the Masjid was again admitted in the hospital where she gave birth to a baby.
“Fortunately, it was a normal delivery,” said Ghulam Hassan Dar. “Kishore rushed to the mosque to inform the relief committee that her wife has delivered a baby daughter and he thanked us all for help. He got so emotional that tears were rolling down his eyes.”
In the trying times, the relief committee did everything possible to ensure the family has home like comfort at the mosque.
“One of our volunteers travelled a long distance to get pure milk and a pack of tea and later we served tea to Neeta after she asked for it,” said Dar.
Later, in the evening of September 13 when Neeta was shifted back to the Hyderpora mosque after being discharged from the hospital, the members of the Gujarat family insisted that locals should christen their new born.
That is when a member of the relief committee came up with the name Kiran. “Kiran means ray of hope and we had a hope even when the devastating floods ravaged the entire city,” he said.
After seeing the kind of treatment they received at the mosque and that too in times of crisis, the mother in law of Neeta was all thankful to the organizers, said another member of the relief committee.
“She was really humbled and prayed for all of us when we arranged milk feeder for the new born,” said chairman of the relief committee, Nazir Ahmad Dar.
After staying at the Hyderpora mosque for two nights, the Gujarat family left for their home-state on September 15. They were dropped at the airport in a vehicle, arranged by the relief committee.
Dar said the committee also managed the air tickets for the family. “All these days have been testing times for all of us and we thought it is our duty to help the family,” said Dar.
Two other expecting mothers were also taken care of by the organizers at the mosque, the shelter home. “They were from Srinagar,” said Dar.
The relief camp is serving the displaced people, who were put up in the mosque, for more than 10 days now. “We had more than 1500 people from outside,” said Ghulam Hassan Dar. The first floor of the mosque was kept reserved for females while as the men would stay in the 2nd floor.
“Everyday hundreds of people would be served tea, lunch and dinner,” said Dar.
(www.greaterkashmir.com)

October 10, 2015
Vatican City: Pope Francis called on every European parish and religious community to take in one migrant family each in... More

October 10, 2015
A Turkish police officer who was pictured picking up the lifeless body of three-year-old Syrian refugee Aylan Kurdi, who... More 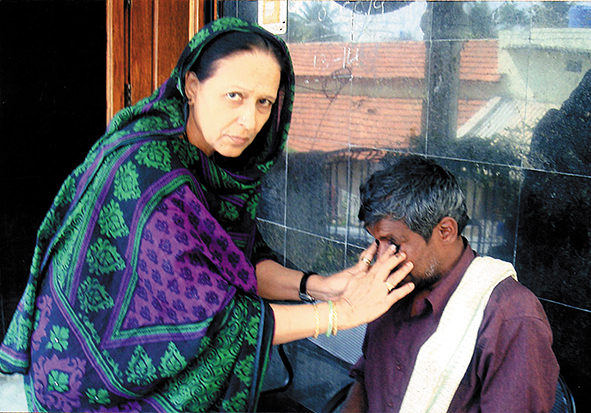