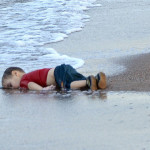 A Turkish police officer who was pictured picking up the lifeless body of three-year-old Syrian refugee Aylan Kurdi, whose death pricked the world’s conscience, said he thought of his own son when he saw the toddler on the beach. Speaking to Turkey’s Dogan News Agency, Mehmet Ciplak recounted how he prayed the little boy was still alive as he walked towards him and scooped him up from the water’s edge. “When I approached the baby, I said to myself, ‘Dear God I hope he’s alive.’ But he showed no signs of life. I was crushed,” he said. “I have a six-year-old son. The moment I saw the baby, I thought about my own son and put myself into his father’s place. Words cannot describe what a sad and tragic sight it was.” Twelve refugees drowned last month when two boats sank on the short crossing to Greece, and images of Aylan’s lifeless body washed ashore in Bodrum in southwest Turkey sparked international outrage over Europe’s migrant crisis. Aylan was buried in the Syrian town of Kobane, now a symbol of resistance by Syrian Kurds against Islamic State (IS) extremists. Aylan’s four-year-old brother, Ghaleb, and their mother Rihana also drowned when their boat sank. His father Abdullah was the only family member to survive and has returned to Kobane to be close to the graves of his wife and children.

October 10, 2015
Vatican City: Pope Francis called on every European parish and religious community to take in one migrant family each in... More

December 6, 2014
The Excellent English School run by social worker Dr. Benazeer Baig in the Bismillah Nagar locality of Bangalore, is in ... More

September 28, 2014
Amid the rescue operations, where the armed forces evacuated over thousands of victims, the IAF roped in help from Golde... More
Prev Post Moderate Islam Has a Voice If You Listen
Next Post Pope Calls On Every European Parish to Host One Migrant Family Each