The Islamic countries are engaged in internecine feuds and sectarian wars, instead of addressing urgent needs of additional resources. By Dr. M. S. Riyazulla Stephen Hawking, the English theoretical physicist, cosmologist and author who passed away in March 2018, could be compared with geniuses like Galileo and Newton. A few years ago he had prophesied […]

The Islamic countries are engaged in internecine feuds and sectarian wars, instead of addressing urgent needs of additional resources.

Stephen Hawking, the English theoretical physicist, cosmologist and author who passed away in March 2018, could be compared with geniuses like Galileo and Newton. A few years ago he had prophesied that within fifty years, man should start vacating the earth. What did he mean by it and what prompted him to presage such an unusual thing? Since then, it has impelled the advanced countries to ponder over and start acting upon it. But the prevailing conditions indicate that the Islamic countries have not fully comprehended the profundity of his prognosis.
Stephen Hawking wanted to underscore the point that whatever natural resources like fossil fuels and minerals were available on the earth and were sustaining life would deplete in another fifty years, making life untenable. His prediction has also been corroborated by many leading geoscientists.

Fossil Fuels
According to Stephen Hawking’s research, the whole universe dates back to about ten billion years and the Milky Way galaxy, in which the planet Earth is located, came into existence about five billion years ago. King Hubert and other geoscientists opine that the fossil fuels found in the bowels of the Earth formed about 100 to 500 million years ago. Man has been making use of these resources only for a few centuries. However, their use increased as civilization advanced, especially during the past 200 years.
According to a study, the world is consuming about 11 billion barrels of oil a year. If oil is continued to be consumed at this rate, there is a strong possibility that all the oil wells will exhaust soon. Statistics predict that the available oil wells will exhaust in 53 years, gas within 54 years and coal mines in another 110 years. Another scientific analysis has even revealed that oil will exhaust by 2050, gas by 2060 and coal by 2088. These revelations have compelled many world powers to start hunting for new deposits of these resources. But even then, new deposits may not suffice human wants if we consider the growing industrialization and population.

Moon and Mercury
In this scenario, one can argue that there are also other sources of renewable energy that could be tapped from the sun and wind etc. But it would be too late by the time the means to exploit their full potential are accomplished. Apart from fossil fuels, there is another looming threat: available mines of gold, silver, diamond, iron, copper and other metals are predicted to deplete in another fifty years.
After the depletion of these resources, life would not be sustainable. Hence, instead of relying on the depleting resources of the earth, most of the major countries have started to venture into other celestial bodies, like the Moon and Mercury, as a sustainable alternative for the Earth. The scientists have positively predicted that many valuable minerals are available in the crust of the Moon and hence efforts are on to source these metals from there, apart from finding out the possibility of settling man there.
In view of the above, it is a matter of distress that the rulers of Islamic countries have either not fully comprehended Stephen Hawking’s warning or are trying to ignore it. As it appears, they are fully engrossed in bloodshed for land and supremacy of their petty interests and have been squandering all their material wealth in procuring the armaments worth billions of dollars. If wealthy countries like the US, Russia and China are thinking of colonizing the Moon, they are likely to be the prime beneficiaries of whatever it has to offer. No wonder if they establish their monopoly over these resources. It is high time that Muslim countries and other nations saddled with huge populations and deficient resources direct their attention and energies towards space science and exploring at least the Moon, if not the distant Mars or Jupiter. There are many notable space scientists in Saudi Arabia, Turkey, Egypt and Malaysia and some of them are working in space centres of America and Russia. They would need to shed their mutual fratricidal hostilities and petty sectarian wars. Islamic countries should jointly establish and fund a space centre in some advanced Islamic country and at least in next ten years they should be able to send an astronaut to the Moon. Apart from the Moon, they should also venture into other cosmic bodies and start searching for their future beyond the frontiers of space.
Anyway, it is a fact that if not in fifty years, in another hundred years all the available natural resources may vanish from the earth. The end of the ‘Golden Oil Age’ on the earth has commenced. Poet-philosopher Dr. Mohammed Iqbal had prophetically told Muslims: ‘Sitaron sey agay jahan aur bhi hain’ (‘There are worlds beyond the constellation of stars’). Let the Islamic countries ponder seriously about this and think of securing the future of the future generations.
(The author is a retired geologist and holds a doctorate in Geology. He can be contacted on cell: 90666-85460. Email: [email protected])

February 17, 2020
From Dosa to Filter Coffee, Your Provision Lies With God! By Nigar Recently, I was fortunate to meet a spiritual coach, ... More
Prev Post Leprosy Patients in Kashmir - No End to Stigma for Descendants
Next Post Job Fair in Mumbai

Choice between Least Disliked and Most Despised 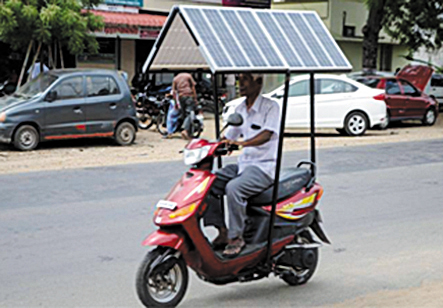