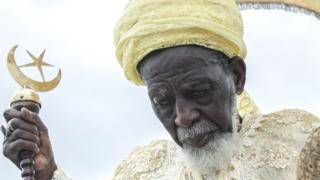 Pictures of Sheikh Osman Sharubutu, sitting attentively in the pews of Accra’s Christ the King Catholic Church, went viral on social media some months ago. The grand mufti, leader of the Muslim community in Ghana, in West Africa, wants to ensure that his legacy is peace the fruit of inter-faith harmony. Those on social media championing the imam’s approach described him as a light shining in the darkness. Some critics condemned his actions as an abomination, but Sheikh Sharubutu insisted he was not worshipping but moving the relationship between Muslims and Christians from mere tolerance to engagement. “The chief imam is changing the narrative about Islam from a religion of wickedness, a religion of conflict, a religion of hate for others, to a religion whose mission is rooted in the virtues of love, peace and forgiveness,” his spokesperson AremeyaoShaibu told the BBC.
Sheikh Sharubutu has been Ghana’s top Muslim cleric for 26 years, and has always insisted the key tenets of Islam are rooted in peace and love, as his weekly sermons at Friday prayers at the Central Mosque in the country’s capital attest. Another favourite theme of his is a call to shun materialism, saying it only brings greed. At his residence in the poor neighbourhood of Fadama, he has insisted that the gates remain open. For years now, hundreds of township residents troop in each morning to fetch fresh water from taps at the property while others visit at night with bowls to be served hot meals for free. It is the nature of Islamic leaders to give to charity, but his supporters say the scale of his work stands out. He has personally sponsored hundreds of students in their education at home and abroad and has also established an educational trust fund to support talented but needy pupils.
Ghana, where Muslims make up 18% of the population in the mainly Christian country, has no history of religious warfare. But relations can be fractious and the imam has sought to douse any flare-ups. He is a member of the National Peace Council, made up of 13 mainly religious leaders – but he is also known to intervene personally to resolve tensions. Earlier this year, he reprimanded a group of young Muslim men who attacked a church in Accra after its pastor predicted his death in the coming 12 months. He told those who had been armed with machetes to forgive the preacher and managed to defuse the tension, something that earned him the thanks of the police chief.
When gunshots reverberated through the streets of Old Tafo in Kumasi in a row over a cemetery in 2016, he immediately made a trip to the Ashanti regional capital. A curfew had been imposed after one person died in clashes. Traditional leaders wanted proof that the Muslim community owned a section of land in the graveyard to bury their dead. The situation nearly degenerated into all-out war after rampaging Muslim youths slapped the traditional leader of the Tafo community. The slapping of a chief constitutes a desecration of his office, a taboo in Ghana. According to Mr Shaibu, the chief imam went to the palace of the Tafo chief, and without even speaking a word, he calmed the situation by the humility and meekness of his presence, preventing further unrest.
It was the second time that he had interceded in a fallout over a cemetery. In 2012, the corpse of an imam in the Volta Region was exhumed and dumped by the roadside by a community who felt Muslims should not bury their dead in that graveyard. Sheikh Sharubutu flew into the south-eastern region and negotiated a peace deal, saving the state from using force to quell the riots.
He puts his peaceful philosophy down to a Quranic verse, which says people should be fair with each other to help achieve a harmonious society: “Allah does not forbid you from showing kindness, and dealing justly with those who have not fought you about religion and have not driven you out of your homes. Allah loves just dealers.”
As a young man, he made this the central message of his lessons as a Muslim teacher in Accra, going on to become one of the country’s most erudite Islamic scholars. He then made history when he was appointed chief imam in 1993, at the age of 74, as until then Ghana had not had a national Muslim leader. There is some trepidation about finding a successor who can follow in his footsteps, given that he has become so central to sustaining religious peace. But his serene nature seems to be key to his continued longevity, something those who come after him may want to emulate. “I am old, strong and vital. I can see, [am] able to read and write without the support of any gadgets. I am able to walk on my own God has not tested me with weakness,” his spokesman quoted him as saying. “I am in perfect control of my mind, I have not grown senile. Placing God at the centre of my life gives me calmness and inner peace in life.”
(Extracted from bbc.com)