Jewish community leaders joined Muslim officials in Christchurch (New Zealand), to hand over a million dollars raised in an American city for the victims of the Christchurch mosque attacks.
Following the 15 March shooting, the Jewish Federation of Greater Pittsburgh raised over $900,000 for Christchurch Muslims. The act of generosity was inspired after Muslims rallied around the Jewish community when an armed shooter opened fire in a Synagogue in Pittsburgh, killing 11 people in October last year. At a lunch time ceremony, the New Zealand Jewish Council president, handed over a cheque to the Christchurch Foundation, to establish the Abrahamic fund.
For members of the Muslim and Jewish faith, the ceremony was much more than just a transferral of money from one faith to another. It was an opportunity to explore the other’s religion, as Jewish and Muslim leaders were taken on a tour of each religion’s respective places of worship. The visits saw Muslims and Jews realise just how many similarities they shared. Federation of Islamic Associations New Zealand spokesperson, Dr Anwar Ghani’s first time in a synagogue, was an experience he thought both communities could learn from. “The similarities between the two faith groups is just unreal. This is also something we need to be promoting within our own communities, that people should visit places of worship so that we improve understanding about each other.”
After their respective visits, both groups joined Christchurch mayor Lianne Dalziel for lunch and the launch of the Abrahamic fund. During her address, the 30 or so people gathered in the Mayor’s lounge collectively nodded their heads when Ms Dalziel said the donation was an extraordinary gift. “The world will remember the response long after they remember the person who committed this atrocity. They will never forget those whose lives were so cruelly taken on that day.” New Zealand Jewish Council president Stephen Goodman signed the document to establish the new fund. He said the Christchurch Foundation would allocate the fund’s money according to the needs of families affected by the attack.
New South Wales Jewish Board of Deputies chief executive Vic Alhadeff travelled from Australia to deliver close to $70,000 worth of money raised by Jews living in the state. He said it would have been easy to simply transfer the money, but he wanted to send a message with his presence. “I wanted to come on behalf of the Jewish Board of Deputies to physically stand here and say we did this because we cared. That’s why I wanted to come here and have a symbolic presence to show that we are all members of one humanity.”
The agreement signed by the Jewish Council and the Christchurch Foundation, acknowledged that any allocation of funds would consider the interests of Muslims. The foundation would now consult with Christchurch’s Muslim community to identify areas where support is needed. 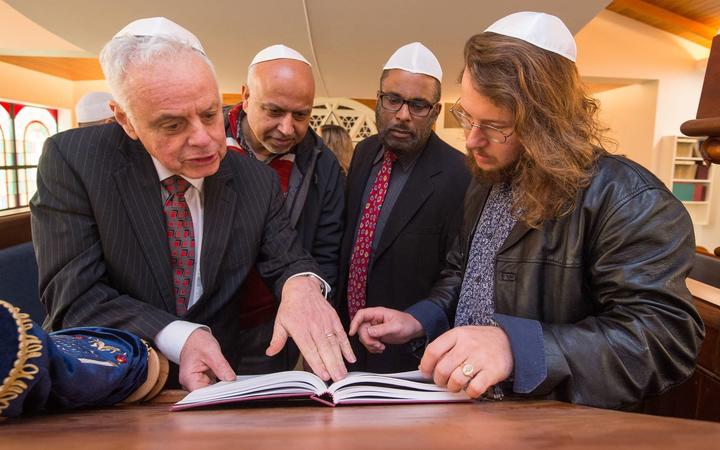