There is no such thing as moderate Islam or radical Islam. There is only one religion of Islam. The terrorist groups are calling their activities “Islamic”. This is false. By deﬁnition, they are not Muslims. In the United States, there are a few Islamic organizations like ISNA, ICNA, and CAIR. However, they are not political organizations. American Muslims do not have a uniﬁed political organization. Of course, these organizations do condemn the terrorists each time they cause problems, but the American media does not pay much importance to their slogans. Muslims do not have their own television channels. America’s Muslim population is comprised mostly of professionals such as doctors, professors and engineers, with very few in politics. There are more than a thousand Islamic centers in the U.S. However, they are mostly run by clerics who are not educated in the American system. Hence, it appears as if Muslims are not raising their voice. Islam forbids suicides, and forbids killing of innocent human beings. Islam does not permit Muslims to war or violence. In Islam, peace comes first and then defense. The defense could take the form of declared war with orders to fight soldier to soldier, but do not harm properties animals birds, children, women, crops or even the trees. The recent event in France is an example of the highest form of barbarism shown by some illiterate fanatics. They have damaged the name of Prophet Muhammad (Pbuh) and the name of Islam. The Prophet forgave his most staunch enemies during his lifetime. These terrorists are doing everything against the teachings of Islam while calling themselves Muslims.
Zahir Ahmed, Islamic Research & Publications Inc, United States of America

August 16, 2019
Thank you for regularly publishing many positive stories and news items in ‘Islamic Voice’ articles on commu... More
Prev Post Fine Example of Impartial Journalism
Next Post North Carolina Killings: Not an Act of Terror? 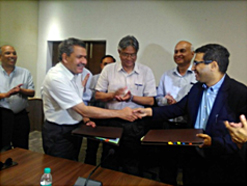