Nurul Islam is a simple man, always with a radiating smile on his face. He launched the Al Ameen Mission three decades ago in West Bengal, to serve humanity. 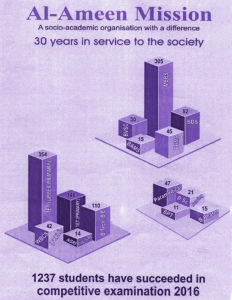 A man who had a dream to have a mission in the name of the Prophet (Pbuh), got inspired from the Gurus who spoke highly of the Vivekananda and Ramakrishna Mission. He was so moved to serve humanity and in particular, the backward Muslims in the area of education, that he launched the Al-Ameen Mission three decades ago in 1986-87.
For Nurul Islam, being the founder and headmaster of Khalatpur High Madrasah coming out of the box, with a larger context was challenging. The Al-Ameen Misison family consisting of 2500 dedicated admin, teaching faculty and staff with 54 branches is spread across West Bengal, accommodating 13,000 residential students from across the entire West Bengal, among them are 40% girls.
The majority of students hail from economically poor families. The Al-Ameen Mission in West Bengal is now spreading its wings in other states of Jharkand, Assam and Tripura. Nurul Islam’s vision is to set up his Mission in the entire country.
Nurul Islam, a selfless person, does not draw any salary from the Al-Ameen Mission and has dedicated his life with no strings attached to the cause. A simple man, always with a welcome radiating smile on his face, he leads his family from the front, a true leader, an inspiration to all. Every single person employed in Al-Ameen is considered as a family member and he values them and looks after them as a family and treats them with high esteem, stands by them to pull them up when they fail in their task.

Rightful Share on Merit
Many of the Al-Ameen Mission employees are very highly qualified and can get a job with a very high pay in government or in private sector, but they stand by with Nurul Islam, to give their time to fulfill his vision in putting the coming generation in the field of education on par with other communities, to compete and get their rightful share not through reservations, but on merit and not through getting funds from government or from foreign sources, but from the funds generated from the community itself. In thirty years of consistent efforts, the Muslims from a mere 2.5% share have in 2016 secured 27.7% (MBBS & BDS) seats equal to the percentage of Muslim population in West Bengal. Today, as per the census, the Muslim population in West Bengal stands at 27.7%. Two thirds of contribution in achieving this result comes from the Al-Ameen Mission. The statistics of the Muslim students securing seats in West Bengal on merit for the current year 2016 are: In Medicine including BDS: 27.7%, in veterinary: 66.6%, in Ayurvedic: 70% and in Homeopathy: 60%. (see the graph chart)
Where Are You Going?
Nurul Islam quotes the 26th verse of Surah At-Takwir: “Fa ayana tadh haboon?” which means “where are you going”? Allah, with so much love and compassion, questions people about the path they have taken. If we listen and understand it properly and deeply, it could bring back people, who have gone astray, to the right path. But unfortunately, people are heedless as if they are going deaf. They have turned a blind eye towards the suffering of fellow human beings. “Al-Ameen Mission, has been tirelessly trying to empower the backward society with education. Our resource is limited, but our aspiration is sky-high. Thus paucity of fund, which ails us often, could not deter us from the path. Because we always remember the age-old maxim: When the going goes tough, the tough get going,” says Nurul Islam.
Nurul Islam first attended the Discover Yourself workshop in Behrampur, in November 2005 and then hosted two workshops for the students and teaching faculty of Al-Ameen Mission in 2005. He states that he got the clarity, empowerment and leadership skills to face any situation with ease and make decisions and he openly states that discover Yourself workshop not only owes its share of success in achieving the results, but has become a part of the Al-Ameen Mission. Nurul Islam has two sons. His daughter and son in-law are part of this Mission.
(Al-Ameen Mission, Central Office: 53 Elliot Road, Kolkata-700016, Phone: 033-22293769, cell: 9830199596/7797600786,www.alameenmission.in)

June 11, 2016
A scientist picks up shovel to breathe a new life into a river that lay dead for nearly two centuries in Muzaffarnagar d... More

October 15, 2013
Known for its humane approach towards patients, with an understanding and caring staff and a team of doctors who relate ... More
Prev Post America Deserves Trump
Next Post ‘Hunar Haat’ at Indian Art Fair