It was only when I started trying to study the Quran myself in translation that I began to realise and appreciate the broad understanding of duties that according to the Quran are binding on us.

The Quran refers to several things that are duties binding on us. In fact, in Surah Al-Qasas: 85, the Quran indicates that the Quran itself is a duty on us. This therefore means that all of the Quran’s commandments are a duty or farz for us. However, despite this, some of us mistakenly think that only some of the Quran’s commandments, like regular prayer and zakat, are binding duties. Accordingly, we focus a lot on these duties but are not aware of many other binding duties that are also mentioned in the Quran. The major reason for this is our general distance from the Quran.
Many of such forgotten duties mentioned in the Quran relate to norms and rules regulating social behaviour. One such duty mentioned in the Quran is to always say what is best. The Quran (17:53) says: “Tell My servants that they should always say what is best.” This is an absolute commandment and no exceptions are made for it. Interestingly, the Quran makes exceptions with regard to some other things for instance, one is permitted to eat forbidden food if it becomes necessary to survive and if the intention is not rebellion against God. But the Quran makes no exception for the commandment to ‘always say what is best’. This means that we must always speak what is best, even to our opponents. Interestingly, the above Quranic commandment mentions that it is God’s servants who should ‘always say what is best’. In other words, this commandment actually in a way defines who is a servant of God on the basis of his or her always speaking what is best.
Respect all Human Beings
There is another commandment that is binding on us according to the Quran but which many of us, owing perhaps to distance from the Quran, do not know about. The Quran (17:70) says: “We have honoured the children of Adam”. I take this to indicate that one should respect all human beings, irrespective of their religion, caste, and so on whether they be Hindus or Muslims, Jews or Christians, Syeds or Ansaris or whatever. Respecting others isn’t just speaking politely with them. It also means respecting them as persons, as well as respecting their right to their views, their faith, their religion, and so on. If people practised this duty of respecting others this way, it would conduce greatly to social harmony.
“Repel evil with what is better”, the Quran (41:34) tells us. This is yet another duty that is binding on us. Responding to evil with counter-evil only magnifies the problem. It never solves it. The only way to overcome evil is through doing good. If people put this Quranic teaching and duty into practice, which they MUST as it is binding, you can imagine how much good it would do.
Consider here another Quranic commandment (6:108): “Do not revile those [beings] whom they invoke instead of God, lest they, in their hostility, revile God out of ignorance.” Not reviling other people’s deities is thus a duty binding on us, a duty that can also conduce to inter-community harmony.
Practise Justice
Another binding duty for us according to the Quran is to practise justice. The Quran (16: 90) says: “God commands justice, kindness and giving their [due to] near relatives, and He forbids all shameful deeds, and anything contrary to reason, and transgression. He admonishes you so that you may take heed!”. This verse is often cited towards the end of the sermon during the Friday congregational prayers, and most of the people take it simply to indicate that it is time to stand up to pray! The first thing this verse mentions is the need to practice justice or adl. So, doing justice is as much an important duty (farz) for us as is regular worship. Included in the meaning of adl is etedal, which indicates modesty, walking on the middle path and moderation. If we abide by adl in all our relationships and in all our roles, taking it to be a binding duty, you can appreciate what a beneficial impact it would have on our own personal lives as well as society at large.
Imagine the society that can come into being if its members realise that it is not only regular prayer and fasting etc. that are duties binding on them but also issues like always speaking what is good, respecting all human beings, responding to evil with good, helping neighbours, sharing our resources instead of hoarding them and practising justice! True Muslims are people who are conscious of these duties and put them into practise in their true spirit. They are people from whom only good emerges, people who give to others rather than take from them.
It was only when I started trying to study the Quran myself in translation that I began to realise and appreciate this broad understanding of duties that according to the Quran are binding on us. Prior to this, I hadn’t heard about these things being duties from any preacher or pulpit. It was the Quran that taught me the importance of serving humanity, and I learnt this only after studying it.
All this indicates the importance of seeking to study and understand the Quran for oneself, with meaning. Without a true connect with the Quran and understanding it properly we cannot be Muslims in the true sense of the term, because it is from the Quran that we can learn what it means to be and live as a Muslim.
Today, the biggest challenge for Muslims is to be connected to the Quran, and through this, living according to Quranic teachings and being mindful also of the Quranic duties, that we have forgotten.
(M.A. Parvaiz is Vice-Chancellor of the Maulana Azad National
Urdu University, Hyderabad. He can be contacted o

October 14, 2019
By Dr Mohammad Aslam Parvaiz What makes a person what she is? In many cases, it is the opportunities that she gets in li... More
Prev Post Quest for Inner Peace in Hyderabad
Next Post The Muslims' Intellectual Decline 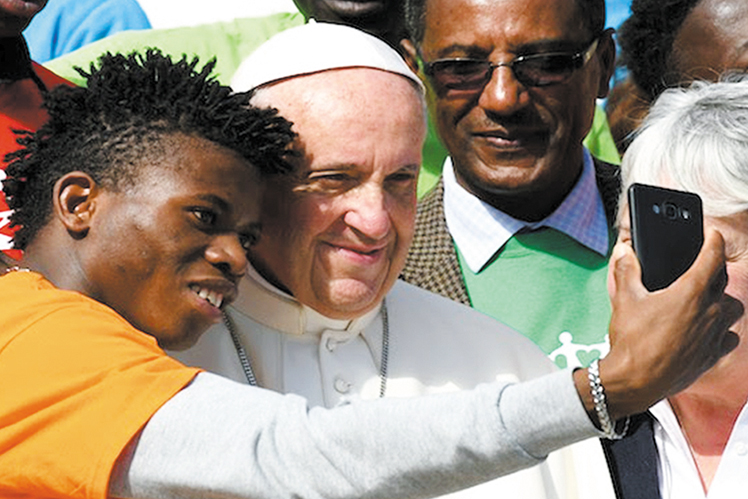 Pope Calls on Christians to Share Hope with Migrants