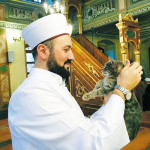 Istanbul: An imam of an Istanbul mosque in Turkey is opening the doors of its mosque to cats roaming on the streets. Imam Mustafa Efe who began welcoming the furry animal into the mosque last year calls the cats “guests” of the mosque. His tale of kindness has spread across the sphere. Imam Mustafa posted a video on Facebook, which showed a mother cat who felt so comfortable at the mosque that she decided to raise her young ones in the mosque.