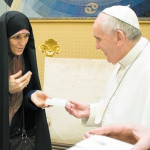 Vatican City: “Since the 1979 revolution, Iranian women have made great strides and are in many respects better off than their counterparts in other Muslim countries in the region. However, their work is not done yet, they still have a long journey ahead,” said Shahindokht Molaverdi, vice president of the Islamic Republic of Iran for Women and Family Participation Affairs. Ms Molaverdi spoke to Asia News after she was in the Vatican for a meeting with a delegation of the Pontifical Council for the Family. On the same occasion, Iran’s vice president also met with Pope Francis. She stated that Iran’s female population stands out in the education field. “There is no comparison with other Muslim countries in the region in terms of education, university enrolment and percentage of graduates. At present, 60 per cent of university students are women. Such a good literacy level also has positive effects on health. Women’s well-being is better than in other countries,” Ms Molaverdi told Asia News. However, “When it comes to participation in the economy, the journey is still long,” the vice president explained. “The same goes for income. For the same job, women earn less than men.”

Norway at Top, Yemen at Bottom of Rankings For Women’s Quality of Life