Seventeen years ago, Esob Ali used to be a dreaded poacher in the wildlife sanctuary killing rhinoceros, but he later turned into an anti-poaching activist. Ali had been assisting conservation and protection agencies working in Pobitora Wildlife Sanctuary to enhance protection of rhinos for the past 15 years. 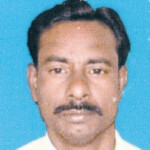 Guwahati: With the demise of Esob Ali, a chapter came to an end. Ali was an example and source of motivation for many while a ‘major threat’ for poachers at Pobitora Wildlife Sanctuary in Assam’s Morigaon district.
It was a sad and a tragic end of the brave-heart who was hacked to death by miscreants, while Ali was on his way to a local market at Mayong. He was attacked by some suspected poachers last fortnight and finally succumbed to his grievous injuries at the Guwahati Medical Hospital College (GMCH).
Seventeen years back, Ali used to be a dreaded poacher in the wildlife sanctuary killing rhinoceros, but he later turned into an anti-poaching activist.
“It’s a huge loss for us. Ali has been assisting conservation and protection agencies working in Pobitora Wildlife Sanctuary to enhance protection of rhinos for the past 15 years. He has been assisting forest and police officials with vital intelligence gathering on movement of poachers, arms and ammunition which had saved countless rhinos in and around Pabitora Wild Life Sanctuary. We have to admit that he played a major role in decreasing the rhino poaching in Pobitora,” said Bibhab Talukdar, secretary general of Aaranyak, an NGO working towards wildlife conservation.
Talukdar, who is also the Asia coordinator of International Rhino Foundation has known Ali for a long time and has played a major role in his transformation from a poacher to a conservator.
Ali was himself a poacher during 1990s. But in 1997-98, the then Range officer of Pobitora WLS, Mrigen Barua and Talukdar persuaded poachers to leave the poaching profession and help the Management in protecting rhinos.
“In 1998, about 18 rhino poachers surrendered and Esob was one of them. After reforming himself, he never went back to poaching. Rather he assisted enforcement agencies to check poaching in and around Pobitora WLS. Some of the surrendered poachers went back to poaching again after a few years. But Esob remained loyal to rhino conservation,” said Talukdar. Ali’s untiring efforts to check poaching made him the enemy of poachers.
“Esob Ali’s sudden demise is a great loss to the conservation movement. He showed how a poacher could reform and continue to support conservation and protection independently,” said Talukdar.
Ali even was awarded by Assam chief minister Tarun Gogoi for his role in minimizing rhino poaching in 2003.
“It is very important how the government handles this case – a test case. Others will not come forward to emulate him otherwise, if stringent action against the culprits, by the government is not initiated. I salute him for his contribution towards protecting rhinos in and around Pobitora WLS. May his soul rest in peace,” Talukdar added. It is also learnt that Ali gave the names of the attackers to the police before he was shifted to GMCH.
Ali who belongs to a poor family, has left behind his six children and wife. Besides helping the cause of rhino conservation, agriculture was his source of livelihood.
“This is a really an unfortunate incident. We are saddened at this development. A person like Ali should have been safeguarded in a better way. I hope the government and police will take some strict measures to nab the culprits and ensure that such tragic incidents do not re-occur,” said Guwahati based award winning photojournalist Biju Boro who also knew Ali.

September 14, 2019
Ayesha Noor, a 21-year-old Karate champion from the slums of Kolkata, will be representing India in an upcoming internat... More
Prev Post What are the Mystics for in Time of Terror?
Next Post Addressing ‘Anti-Muslimism’ and ‘Islamophobia’