A meeting convened in Bengaluru to hear the victims and a visiting delegation from Mudhol was told that some elements within the local police aided the rioters and obstructed the Fire Force personnel from carrying out its duties. 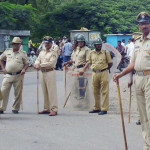 Bengaluru: Mudhol, a small town 60 kms west of Bagalkote town, witnessed unprecedented anti-Muslim violence on the night of September 23, 2015, when Ganesh procession was being taken out in the town. The anti social elements set afire 45 shops belonging to Muslims causing damage to the tune of Rs. 13 crore. The violence was sudden and totally unprovoked. There was no indication of any tension in the town and the perpetrators had planned and selected the targets with pre-planning.
Besides 45 shops, 35 two-wheelers, two cruiser maxicabs, two lorries, 22 pushcarts and two houses were also destroyed in the arson. A textile mall owned by Akbar Hussain was completely destroyed sustaining losses to the tune of Rs. nine crores. No injuries or deaths were reported.
While Deputy Superintendent of Police, Circle Inspector and an ASI have been suspended, the State Administration has so far maintained total silence on the violence. Minister Roshan Baig and Qamarul Islam have visited the town since then. Local BJP MLA, Govind M. Karjol had not visited the spot till these lines were written.
It is said that superintendent of police, Martin, a native of Nagaland failed to control the mobsters and arsonists. Though he was not partial, he was ineffective due to difficulty in conversing with the men under his command in the local language Kannada. The riots which were started on the pretext of someone pelting stone, continued past midnight. A police detachment sent from Belgaavi could bring the situation under control. Nearly 140 people were taken into custody on the charges of rioting. Mr. A. H. Ambi, advocate and President of the Anjuman e Islam, Mudhol informed this paper that efforts were on to release those arrested on bail.
Several teams of social workers and Muslim organizations have so far visited the town and assessed damages. According to the assessment by the ‘Bagalkote District Relief Committee’ set up for the purpose of rehabilitating the victims, businesses belonging to 97 persons have either been damaged or sustained partial losses. The Jamaat e Islam Karnataka has released Rs. five lakh towards immediate relief operation in order that petty traders could be helped to reestablish their businesses.
A meeting convened in Bengaluru to hear the victims and a visiting delegation from Mudhol was told that some elements within the local police aided the rioters and obstructed the Fire Force personnel from carrying out its duties. The meeting attended by representatives of Milli council, Jamaat e Islami Hind, Komu Souharda Vedike, Karnataka Muttaheda Mahaz, FDCA and APCR decided to represent the matter to the State Government, Home Minister, and the Minority Commission Chairperson, Bilquis Bano.
Later a delegation comprising Mahaz’s secretary Masood Khader, Feroze Abdulla, Syed Iqbal Ahmed, Jamaat e Islami’s Yusuf Kunnhi, activist Syed Tanweer Ahmed, Syed Irfan Bidri met officers in the Chief Minister’s Office and demanded that the CoD should be asked to investigate into the violence and anti-social elements be prosecuted. They also met DIG, Om Prakash and briefed him about the situation. The Karnataka Minority Development Corporation (KMDC) Chairman Masood Faujdar informed the members that the Corporation would provide loans to the tune of Rs. 25 lakh to the people who have sustained losses in businesses. The Millat Relief Committee has decided to release Rs. 15 lakh for immediate relief to the victims. The APCR Convener Irshad Ahmed Desai and Secretary Akmal Rizvi will initiate action to get those who are innocent and arrested under false charges to be released.
Earlier, nearly 350 activists of various organizations held a protest opposite the Deputy Commissioner’s office on October 15 in Bagalkote and demanded that those responsible for arson should be arrested immediately.

March 12, 2017
Members from diverse walks of life gather to discuss issues affecting the community in Karnataka. By A Staff Writer Beng... More
Prev Post Nobel Prize for Turk Scientist
Next Post Nov. 10 to be ‘Tipu Day’

“Roads of Arabia” Exhibition in Beijing