Turnaround in fortunes of Govt. V.K. Obaidulla School leads to surge in support from the community. 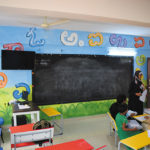 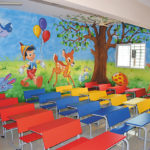 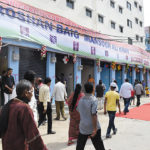 Some may mistake it for a modern upscale public school. But Government V. K. Obaidulla High School in the heart of Bengaluru Cantonment is just another Government High School, of course with a difference now. Till a couple of years ago, it was a brownfield institution with decrepit buildings, listless teachers and a few kids strutting about its vast ground. Except for its glorious past, there was nothing to write about it. The Urdu medium instructions that it imparted had outlived its utility. The local residents had switched over to the English medium schools that abound in its vicinity. Lack of patronage by the community had all but sapped its substance to leave a shell that reminded of its halcyon days. The land sharks had been training their eyes on the prime real estate.

Transformed
Today it stands transformed. The turnaround during the last two years is breathtaking. A new, grandiose, five-storey edifice with a pleasing facade has replaced the old structure. A series of vertical beams in spectral colour cover the front while multicoloured blocks cover the side wings. Children in neat uniforms are guided by liveried stewards to their respective classrooms. A large retinue of watchful maintenance staff is continuously on the move along the classrooms. Teachers, pert and sprightly, with files clipped between fingers, walk briskly from staff room to classrooms as the gong heralds the new period.
Reincarnation
It is almost a reincarnation for an over a century old school, both in style and substance. A businessman with philanthropic disposition, Mr. V. K. Obaidulla had dedicated the half an acre land for the school to be set up in 1913. Obaidulla was a councillor too in the Bangalore Municipal Corporation (BMC). Curiously, the school records show that it had 300 students on its rolls then. An Urdu medium school, it served the local Muslim community. Several of its alumni later joined colleges to attain higher degrees and join the State’s bureaucracy.
The current turnaround in the fortunes could be solely attributed to Karnataka Minister for Urban Administration and Hajj, Mr. R. Roshan Baig, himself an alumnus of the school. Concerned at the pathetic plight, Baig took up the cause of the school earnestly. He persuaded the I. Monetary Advisory, an investment company to adopt the school with a revival plan. While infrastructure upgradation was foremost on the agenda, the IMA knew something drastic must be done to bring in the substance to rekindle the academic spirit.

Aesthetic Touch
Working in close tandem, and with the Minister, the sponsors worked to the plan. Lo and behold! The school with the state-of-the-art infrastructure began functioning in its new premises from June 2, the beginning of the new academic session. The IMA is stated to have pumped in Rs. six to eight crore to raise the grand edifice with around 60 classrooms, half a dozen staff rooms, two well-equipped computer labs, science labs, a library hall, and two large dining halls for serving the midday meals. The classrooms for beginners have been aesthetically done with characters drawn from the Arabian Nights, Tenali Rama, Motu and Pathlu and Disneyland.
Bowing to the wishes of the local residents, the DPI has sanctioned English medium instructions in order that it could take in students from varied linguistic backgrounds who all agree upon English to be the medium of instructions. However, Urdu, Kannada, Telugu, and Tamil will remain as option within the three language formula. And result is there to see for all. Support surged following the turnaround in the infrastructure. According to vice principal, Syed Athar Pasha, the school received over 9,000 applications for admission this year and the management had to admit one among the five of them as sanctioned strength was only 1,600. The school will charge no fee in keeping with its status as a Government School.
The IMA proposes to spend nearly Rs. two crore annually on the school towards salaries of the 70 of the total 86 teachers supplemented by the administration.

Engaging the Community
Mr. Mansoor Khan, founding Director of the IMA says, the School plans to engage the local community through free English-speaking class, computer learning and free access to library during evening hours. Even the 16 small shops abutting the northern wall of the school property have been reconstructed and handed back to the owners who ran the small lathe and auto repair workshops. Mr. Roshan Baig was the chief guest at the handing over ceremony of the shops on June 19. The new campus was inaugurated by Karnataka Chief Minister Siddaramiah on June 10 in the presence of Mr. Roshan Baig and IMA functionaries.
Philanthropic spirit and pro-active help from the minister has revived the school’s fortunes even while preserving the legacy of the original founder Mr. V. K. Obaidulla.

October 14, 2019
There could not have been a better choice than Ravish Kumar for this year’s Magsaysay Award. Ravish has demonstrated exe... More
Prev Post HZCT Enters Silver Jubilee Year
Next Post British Elections - 15 Muslim MPs in the new House

Interfaith Bonding at a Bangalore Iftar

Muslims in Athens Finally get a Mosque