The facility has come up after 20 years of decentralization of Hajj arrangements in the country. 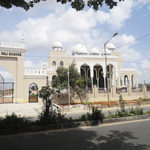 Bengaluru can now boast of a Haj Bhavan, a facility thrown open for Haj pilgrims after full 20 years after the city was directly connected with Jeddah in Saudi Arabia for Hajj purposes.
A look at the grandiose Haj Bhavan on the Thanisandra Main Road suggests that it was worth the wait. Situated close to the Kempegowda International Airport (just 15 kms south of it), the Haj Bhavan’s façade is a lookalike of the Grenada’s Al-Hamara Palace. Built over 2.75 acres of land, the built-up area provides over two lakh square feet of usable space for pilgrims departing to Makkah for the annual Hajj pilgrimage. Topped with three onion domes, the external court is dominated by a large pleasing fountain.

Accommodation for 700
The Haj Bhavan with 100 rooms can accommodate nearly six to seven hundred inmates at a time. The prayer hall on the 4th floor can take around 1,000 namazis, with provision for separate compartment for both men as well as women. Separate wuzu facilities for men as well as women have been provided. The five-storey (ground plus four floors) edifice is fitted with seven large-sized lifts.
The large lobby has provision for reception, flight check-in counter, cloak room, immigration, baggage scan and departure of pilgrims. Cloakroom can take in 500 suitcases at a time. The auditorium has a seating capacity for nearly 700 people, while a conference room has provision for around 100 people. The latter has a provision for a library too.

RwH and STP compliance
The building addresses environmental concerns with provision for rainwater harvesting through mandatory RwH compliance with a special sump having storage for nearly a million litres of rainwater which can be used for bathing, washing and for gardening purposes. Besides, the facility has its own sewage treatment plant (STP) which can recycle the entire outwash from the facility. In fact, under the current BBMP (Bruhat Bangalore Mahanagar Palike) regulations, large facilities are supposed to have onsite water recycling facilities and mandated not to send their outwash to the BWSSB sewerage lines. The recycled water would be stored in a sump away from the sump that receives the municipal water supply. Yet another sump stores water for fire extinguishers. Altogether the three sumps could have nearly a million litres of fresh water at any point of time.

Dining Hall, Cafeteria
The Haj Bhavan has a large dining hall attached with state-of-the art kitchen, and will soon be opening its own restaurant as well as a cafeteria. The acoustics take care of the public address system for the entire building. The facility has a 20-bed hospital with separate wards for men and women. Power back-up can manage emergencies in the event of power failure. The basement parking can take around 250 four-wheelers.
The building is surrounded by wide open courts with considerable area under flower-beds and trees. Three large entrances provide access from the main thoroughfare while service gates on sides have provision for allowing luggage and delivery vans.
Karnataka has a quota for nearly 6,000 Hajj pilgrims under the Central Haj Committee, preponderant majority of whom depart from Bengaluru while a few hundred also take flights from Mangaluru and some (from Gulbarga region) even depart from Hyderabad.
The foundation stone for Haj Bhavan was laid by Mr. Sadananda Gowda, then Chief Minister of Karnataka in 2011. The actual construction began in 2012. The Government of Karnataka provided over Rs. 60 crore for the purpose. The construction work was undertaken by Ms. Shirke Construction Technology Limited while consultancy was provided by Prestige Developers. Ms. Sajjad Architects prepared the plan and guided the development of the facility. The interior would be taken up by K2K interiors following the completion of Haj flights for the current year. The project has been executed with due concern for Islamic aesthetics.
Minister for Urban Administration and Hajj Affairs, Mr. R. Roshan Baig told this scribe that the facility would be used for holding of conventions and for hosting students coming to the State capital for CET (Central Entrance Test) counseling for selection of professional courses during June every year.
Following decentralization of Hajj arrangements from the country, Bengaluru became the embarkation point for Haj pilgrims in 1996-97 pilgrimage. However, promise of a Hajj facility could not materialize for several years as location of the new international airport itself was mired in uncertainty for years. But once the work began, there was no stopping the project. The BJP government in the State (2008-2013) sanctioned Rs. 40 crore in 2010 for the project. The succeeding Congress Government allocated a further sum of Rs. 20 crore.

October 14, 2019
There could not have been a better choice than Ravish Kumar for this year’s Magsaysay Award. Ravish has demonstrated exe... More
Prev Post HWPL to Host “2nd Annual Commemoration of WARP Summit
Next Post Chinese Haji Pedals his Way to Makkah