“Practical implementation of interfaith dialogue principles by various faith groups is the need of the hour”, was agreed upon by participants at the 13th annual Interfaith dialogue & pilgrimage, organized by the Sera Jey Monastic University and Foundation for Universal Responsibility of the Dalai Lama. 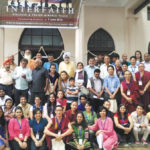 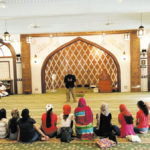 Bengaluru: The Sera Jey Monastic University in association with the Foundation for Universal Responsibility of the Dalai Lama, New Delhi, organized an inter faith dialogue and prayer for world peace on June 9, in Bengaluru at the Sera Jey Bangalore Buddhist Society. The purpose of this interfaith programme was to strive towards progress of the human society by transcending the mistrust and suffering generated by political, economic and social conflicts. The Foundation for Universal Responsibility of the Dalai Lama works more with the youth who constitute the majority of the world’s population. It focuses on development and promotion of human values such as compassion, forgiveness, tolerance, contentment and self discipline, which every human being has the capacity to cultivate. The 13th annual interfaith dialogue and pilgrimage brought together 33 youngsters, from different parts of India. The group was led by Thupten Tsewang from Foundation for Universal Responsibility of the Dalai Lama, Delhi. “The two week programme , starting from June 1 to 16, involves visits to religious centres across South India, starting from Bengaluru, to Mysuru, Shravanabelagola and Bylakuppa. Two days are spent in each centre, with lectures, discussions on each faith and the second day is spent in attending prayers and rituals. Interactive sessions are conducted in collaboration with respective centres of faith, along with a guided tour of the places of worship,” explained Thupten Tsewang.
The two day session on Islam on June 2 and 3rd June was held in Tulip Hotel for the students in Bengaluru and was handled by Dr. A.W Sadathullah Khan, Editor, Islamic Voice, Ashraf Mahmood, supported by Riyaz Ahmed. Ashraf Mahmood handled the questions, after which the students were taken to the Qadria Mosque visit, to experience the spiritual ambience.
The programme also brought together scholars and intellectuals from various faiths on June 9, for an interfaith prayer, open dialogue, small group discussions and presentations. The focus was on the importance of interfaith dialogue and promotion of religious harmony. The open dialogue was represented by H.S Bhatia for Sikhism, Mahendra Jain for Jainism, Reverend Jaideep for Christianity, Rajagajaindra guru for Hinduism and Dr. Sadathullah Khan for Islam. It was an unanimous agreement among the participants that the interfaith dialogue had to be followed up by practical steps by each faith groups in their own capacities to promote harmony in the society. For more details, contact: Director – Adminstration and General Manager – Programmes: Thupten Tsewang, email: [email protected] Foundation for Universal Responsibility of H.H. the Dalai Lama
Core 4A, Upper Ground Floor, India Habitat Centre, Lodhi Road, New Delhi-110003, email: [email protected] Website: www.furhhdl.org

October 14, 2019
There could not have been a better choice than Ravish Kumar for this year’s Magsaysay Award. Ravish has demonstrated exe... More
Prev Post Untouchability Among Muslims
Next Post Dr. A.W. Sadathullah Khan’s - Talk at the Interfaith Open Dialogue

Community is Sleeping on Wakf Issues