The Hostel has four floors, with 13 rooms in each floor.
It can accommodate around 180 students. 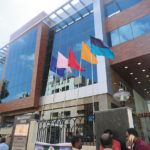 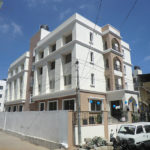 Bengaluru: The Central Muslim Association (CMA) of Karnataka opened its newly-constructed boys’ hostel here on January 1. The hostel can accommodate 160 people in 52 rooms. The CMA also commissioned the CMA Centenary Tower commercial complex at the back of the Hostel. The commercial complex has 50,000 sq. ft. of rentable space which is likely to yield revenue for the century-old organization established by philanthropists of yore. The two buildings stand back to back and are equipped with modern facilities.
The Hostel has four floors, with 13 rooms in each floor. It can accommodate around 180 students.  The ground floor has a TV room, library, kitchen and dining room. Each floor provides seven toilets and bathrooms. There is ample parking in the basement.
The two complexes are located in the Second Block of Jayanagar near the South End Circle. The Metro line passes by the area on R. V. Road. The complexes are located on a 33,000 sq. ft. plot of land. The entire expenses for the Boys Hostel were borne by renowned builder, Mr. Ziaullah Sheriff of India Builders Corporation. The Centenary Tower was built at a cost of Rs. 12 crore by the CMA itself. The contract was given to Prestige Builders.  The Hostel and commercial complex were completed in two years.    Mr. R. Roshan Baig, Karnataka Minister for Urban Infrastructure and Hajj, Mr. Irfan Razack of Prestige Group, Mr. Ziaullah Sheriff of India Builders, Maulana Mufti Ashraf Ali of Sabeelur Rashad were present on the occasion of the opening of the hostel.
Incidentally, the CMA has completed centenary of its founding. It had been running a students’ hostel behind the K. R. Market for nearly eight decades. The land of the old hostel was acquired by the Namma Metro for its station. The amount paid to the Central Muslim Association was utilized to purchase the land at the Dasappa Compound.
Dr. Zaheeruddin, General Secretary of the CMA told Islamic Voice, the Association has also recently opened a Pre-University College in Kaval Byrasandra Area of Bengaluru and has entered into an agreement to purchase a 120-acre plot of land in Ramanagram for building a technology park and research institute. The CMA, established a century ago, owned a hostel behind Bangalore’s famed City Market. It was acquired by the Bangalore Metro Rail Corporation Limited for construction of its station three years ago. The CMA was paid Rs. 38 crore for the huge space, The Association purchased the prime real estate near the South End circle for the construction of the boys hostel. It also bought a property built over 19,000 sq. ft. space in eastern part of the city known as Kavalbyrasandra and started a Pre-University Girls College two years ago. The college has currently 70 girls students.