[email protected] 0 April 16, 2016 12:00 am
Al Ghaith Wafiyya College – A Madrasa for Women
Flower on the hair – new fashion trend
Women in the Early Days of Islam 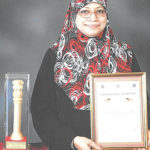