Islamic Voice 0 January, 2017 12:00 am
Iran’s First Woman Ambassador after Revolution
Women will Change the Muslim World
Why Can’t I Be Just another Woman”¦ But With A Headscarf? 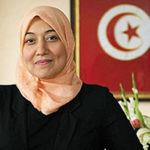 Tunis: In 2011, for the first time in nearly two decades, Sayida Ounissi returned to Tunisia with the freedom to be open about her political beliefs and affiliations. Her arrival was tentative”she did not intend to stay long, nor did she have major political aspirations. But the 29-year-old did not go unnoticed. She now serves as secretary of state for vocational training and entrepreneurship, making her the youngest member of the Tunisian government. Since coming into office, Ouinissi has been involved in a number of negotiations with Tunisia’s major labour and trade unions, trying to include them in the development of a new framework for the protection of private sector workers’ rights. “As secretary of state, I now have a folder, in terms of public policies, which is really touching core problems that women are facing in terms of economic exclusion, violence against women, right to education and positions in their professional areas. So I am in a position where I can be more gender-oriented,” says Ounissi.