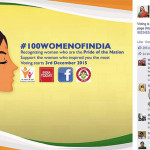 The Ministry of Women and Child Development (MWCD), in collaboration with Facebook, have announced the #100Women initiative that seeks to recognize and acknowledge women who are making a difference in their communities, across the country. 12 Muslim women across the country have made it to the list of THE top 200 women nominees who were shortlisted by a jury constituted by MWCD, in categories ranging from education, sports to women empowerment.
The Voting for the #100Women Achievers’ Contest began on MWCD Facebook page from December 3 to 20, 2015.
In Agriculture and Animal Husbandry category, Sainaba Yousuf from Palakkad, Kerala is one of the nominees. She has contributed to enhancing the livelihood opportunities in agriculture, animal husbandry and promoted sustainable farming.
Dr Shaik Abdul Tasleem Sultana from Renigunta, Andhra Pradesh: She has rehabilitated scores of physically and mentally challenged children at the district level.
Suraiya Bano from Bhilai, Chattisgarh: She has been honoured with national and international awards for her extraordinary work in the stream of educational practices in the country.
Zainab Khan from Meerut, Uttar Pradesh: She transformed her life from being a child labourer, into an advocate of education for girls in her block at school.
Rehana Rehaman from Shapur, Uttar Pradesh: A crusader on foot who went from home to home to educate the Muslim girl child.
Sumaira Abdul Lali from Mumbai, Maharashtra: She pioneered and led campaigns against the serious health and environmental hazards of noise pollution.
Rashida Bee from Bhopal, Madhya Pradesh: Award Winning and tireless voice of Bhopal Gas victims.
Parssa Naqvi from Lucknow, Uttar Pradesh: She succeeded against odds when she became a professional badminton player.
Nazneen Ansari from Varanasi, Uttar Pradesh: She is only 22 years old hailing from a family of weavers. She translated Ramayana into Urdu.
Mumtaz Kazi from Mumbai, Maharashtra: She holds the Limca Book of Records for being the first women diesel engine train driver.
Azeena Khan from Jaipur, Rajasthan: She distributes newspapers, continuing her family legacy from the age of 9 riding through the city early morning..
Begum Shehnaz, Lucknow, Uttar Pradesh: President of NGO Bazm-e-Khawateen, she has supported women in all frontiers social, economic or legal.
(twocircles.net)

I am a Professional Laugher