Niloofer Rahmani, First woman pilot of Afghan Air Force has been honored with the U.S Secretary of State’s International Women of Courage Award. Rahmani, 23, defied death threats from the terror group and even members of her own extended family to become the first female fixed-wing Air Force aviator in Afghanistan’s history and the first female pilot in the Afghan military since the fall of the Taliban in 2001.
Captain Rahmani and nine other inspirational women from across the world were awarded the U.S Secretary of State’s International Women of Courage Award 2015 at a ceremony last week.
She was just 18 when she heard a news announcement saying the Afghan Air Force wanted to recruit pilots. She enlisted in the Afghan Air Force Officer Training Program in 2010 and in July 2012 graduated as a Second Lieutenant. She flew her first solo flight in a Cessna 182 and decided she wanted to fly even larger aircraft so she attended advanced flight school and was soon flying the C-208 military cargo aircraft.
While women are traditionally banned from transporting dead or wounded soldiers Captain Rahmani defied orders when she discovered injured soldiers when she landed during a mission. She flew the injured men to hospital and reported her actions to her superiors who chose not to impose sanctions on her. When her achievements were publicised Captain Rahmani’s family received threats from both family members and the Taliban, who disapproved of her ambition and career choices.
Captain Rahmani said that ever since she was a little girl she had dreamed of becoming a pilot and spent nearly a year studying English in order to be able to attend flight school. 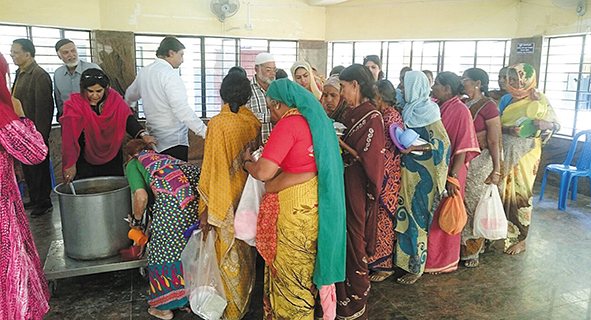 A ‘Roti Bank’ in Aurangabad for the Poor