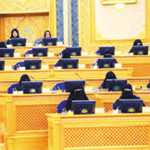 March 18, 2020
A woman from Saudi Arabia, Lamia bint Majed, secretary-general and a member of the board of trustees of Alwaleed Philant... More

March 18, 2020
Women are not usually allowed into burial grounds. But in NR Pura of Chikkamagaluru district in Karnataka, a Muslim woma... More

March 18, 2020
After the death of a young girl in upper Egypt during a botched circumcision, women and doctors in Cairo launched a numb... More

March 18, 2020
The Saudi Ministry of Justice recently announced that as many as 17,000 people had applied to register as conciliators a... More
Prev Post Dr. Jemilah Mahmood - Malaysian Woman Leads Mercy Mission
Next Post Pope Calls on Christians to Share Hope with Migrants