More than half of women respondents in the UAE feel that they are offered jobs based on their experience, and that gender plays no role in the decision of a manager when hiring them, a recent survey by Bayt.com and YouGov has found. The survey measures the perceptions of women in the region, when it comes to equality at work, motivations for employment, challenges faced at work, as well as career and life ambitions. It also found that four in 10 respondents have never been asked questions that made them feel discriminated against as women during an interview. Interestingly, the survey also revealed that 65 per cent of female respondents in the UAE report that women in their country have reached the same level of workplace equality as compared to working women in western countries. Although 65 per cent of women surveyed in the UAE believe that all employees work equal hours, only 26 per cent believe they receive the same salaries. In addition, 43 per cent of women believe that their chance of being promoted depends entirely on job performance and that gender plays no role. According to the survey, the top three challenges that women in the region face in their work environment are less opportunity for job promotions, stressful and demanding work environment, and lack of sufficient job training and coaching. 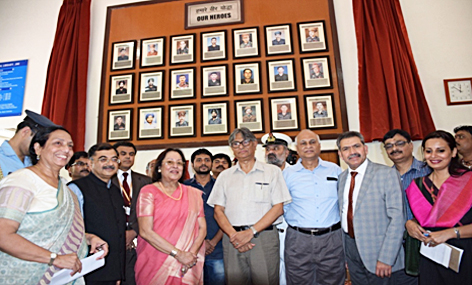 ‘Wall of War Heroes’ at Jamia