“There is one God. And there are many faiths. That tells us that God is bigger than religion, even though we need religion to speak to God. Religions are like languages. The existence of English does not refute, replace or supersede the existence of French, Italian or Urdu. Each language preserves a unique set of sensibilities. There are things you can say in one that you cannot translate, without loss, into others. That is why we are enlarged by their multiplicity and would be impoverished if one disappeared. Nonetheless, they describe the same reality, as religions reach out to the one God. They do not, should not, threaten one another. To believe otherwise is to mistake religion for God….
The great challenge to religions in a global age is whether, at last, they can make space for one another, recognizing God’s image in someone who is not in my image, God’s voice when it speaks in someone else’s language. At stake is the great teaching of the Hebrew Bible—the diversity of creation, the dignity of difference.”
(Jonathan Sacks, Celebrating Life: Finding Happiness in Unexpected Places)
(Jonathan Henry Sacks, is a British Orthodox rabbi, philosopher, theologian, author and politician. He served as the Chief Rabbi of the United Hebrew Congregations of the Commonwealth from 1991 to 2013).

Where God wants Us to Be

November 15, 2018
Even the smallest good deed can change someone’s life. “I have spent much of my life thinking about life, observing peop... More

April 5, 2018
‘When the great Sufi Jalaluddin Rumi heard of two people arguing about religion, he said, “These people are involved in ... More

December 15, 2017
“The modern world has everything but it needs this small message of four words TURN BACK TO GOD. I have but one tongue. ... More

World and its Sphere

July 9, 2017
Constantly polishing the heart with the dhikr (remembrance of God), being in a state of awareness and self-reflection, i... More

April 14, 2017
“I can complain because rose bushes have thorns or rejoice because thorn bushes have roses” * “Problems are not stumblin... More
Prev Post Morgenall Pharma - A Comprehensive Healthcare Center
Next Post Someone Who Influenced Me Positively - My School Teacher 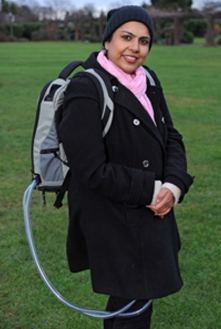 Selwa Hussain – She Carries her Heart in a Backpack