Ayesha Noor aims to knock out poverty with the help of Karate. 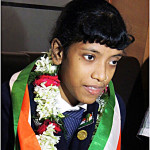 Kolkata: Life in a Kolkata slum can break the spirit of even the most strong-willed person. It can also, however, inspire people to learn the art of fighting their battles at an early stage; and Ayesha Noor is no different. A 19-year-old teenager, Noor has picked up state, national and international awards in Karate almost at will, even as she deals with epilepsy on a personal level and remains on regular medication.
For Noor, winning came early, almost as a natural habit. When she was 14, under the guidance of her coach M.A Ali, who is also an accomplished Karate teacher, she won the 15th International Youth Karate Championship held at Mumbai in 2010, where athletes from 16 countries participated.
Success never left her side after that, although as is the case with most athletes in India, nothing improved for her on the financial front. Having lost her father at the tender age of eight, Noor and her family continued, and even now, continue to share a room with her family of six, in a Kolkata Khula bari (slum) at Mofidul Islam Lane in central Kolkata.
But such hindrances have done little to stop Noor’s quest to be the best in the country, and among the best in the world.
Noor showed that the 2010 success was no flash in the pan: in 2011 and 2012, Ayesha also bagged the Gold Medal at the 19th and 20th National Karate Championship. An important moment in her life came in 2013, when she won the Gold Medal at the `Thai Pitchai International Youth Karate Championship 2013’ in Thailand. The larger challenge was to arrange for the money to travel to Thaliand.
With one brother working as a hawker earning roughly Rs 4,000 a month and mother working as a maid to make ends meet, the money for Thailand was completely out of question. It was here that Twocircles.net associated with the cause of Noor, an association that Noor’s mother Shakila Begum and Coach Ali are thankful about. Struggling for funds, her achievements were written about inTwocircles.net at that time. The story was a success, with many organisations, along with Twocircles.net coming forward to help. She, of course, won the tournament. In 2014, she got the highest Black belt degree in Karate at Kolkata, from the Indian Unit of Byagra Kan Karate International, Thailand.
Her success has also gained international recognition, with San Francisco-based Independent Television Service (ITVS) having decided to make a documentary on Noor’s life under the 10-minute screening as part of `Woman and Girls Lead Global’ (WGLG) project. It will be headed by award-winning director, writer and photographer Koen Suidgeest of Netherlands. Towards the end of October, Suidgeest also wrote to West Bengal CM Mamata Banerjee. The CM’s office assured all possible help to Noor in the pursuit of her passion. He also wrote to Sarbananda Sonowa, the Union Minister of State for Youth Affairs and Sports with regard to Noor. The shooting for the documentary will begin hopefully this month, after Suidgeest receives his Visa.
But for Shakeela Begum, the concerns are more short-term. Since Noor suffers from Epilepsy, her family spends more than Rs 2,000 per month on medication. Despite all her achievements, she does not even receive medical assistance from the state government. Begum also hoped that like other athletes, who have been provided housing by the state government, Shakeela and her family also receive similar assistance, so that she can move out of the single-room quarter.
Mindful of her situation, Noor hopes she gets a government job so that she can help improve her family’s condition. But with the right guidance, one can only imagine the heights of success that Noor can reach. n
(Twocircles.net)

November 11, 2017
Afaf Raed has won the overall award in the challenge to read 50 Arabic books a year. A Palestinian girl has won this yea... More
Prev Post Pearls of Wisdom
Next Post God is Greater than Anything - Christians and Muslims as Co-Pilgrims