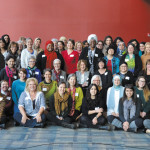 Heba Macksoud, a hijab-wearing woman, was shopping in a supermarket in New Jersey, USA, when she faced a sudden torrent of abuse on account of her religion from an elderly man. She quickly asked for the manager of the supermarket. When manager, Mark Egan, arrived, Macksoud told him what had happened.
Egan wanted to find the man who had abused Macksoud, but the offender had already left the store. When Macksoud said she had to shop for more items before picking her kids up at school but didn’t feel safe, Egan stayed with her.
For that beautiful act of human kindness, Egan received a plaque and standing ovation from 350 Muslim and Jewish women — and a few men at the recently-held ‘Muslim-Jewish Women’s Leadership Conference’ in Princeton, New Jersey. The conference, said to be the largest such gathering of Jewish and Muslim women coming together for peace, was organised by the Sisterhood of Salaam-Shalom, an organization seeking to promote peace and harmony between Jewish and Muslim women, which has 20 chapters in the USA and one in Britain.
Sisterhood founder Sheryl Olitzky began the Muslim-Jewish women’s meetings in 2010. As a resident of central New Jersey, which has a substantial Muslim community, she knew that there was little by way of personal interaction between the two religious communities. She wanted to initiate one. Not knowing how to reach any Muslim women, she called the area’s mosque. The imam gave her the name of the mosque’s female chair, and Olitzky left her a message. And another, then a third. The woman wasn’t returning her calls. But after several messages, she finally did. “We hit it off right away,” said Olitzky. “That changed both of our lives.”
With friends in tow, they began meeting monthly—a dozen women rotating between each other’s homes. After a while they decided to tell the community what they were doing, and so they began a newsletter. The Sisterhood of Salaam-Shalom filed for non-profit tax status in 2013.
The group provides a means for Jewish and Muslim women to become friends, in the process learning to appreciate the goodness in each other’s religion and culture and their fellow humanness.
(For more details, see The Sisterhood of Salaam-Shalom website http://sosspeace.org/)