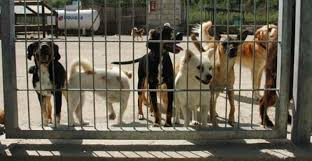 One day, Shen spotted a mother-dog at the gate of the mansion, with four little puppies behind her. He rushed towards the gate to drive the dog away.