Yasin Sharief and Mahaboobulla Khan from Travelstall have not just been travel planners for students, but also compassionate care takers and guardians to the kids on their travels. 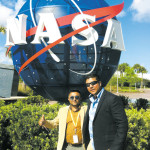 In 2007, when B2B online airline ticket booking sounded alien to travel agents in India, Travelstall with the help of technology designed an online platform which enabled them to issue tickets across their counters. Travelstall started as a subsidiary of Labbaik Tours and Travels Intl, an IATA accredited company since 1997. Its sister concern J.S. Tours and Travels is Bangalore’s leading travel company for Haj and Umrah services. Travelstall has brought experience and expertise to all packages wanted by their customers, ensuring that they know everything about the experience before sending a traveler for It. Travelstall started ‘The Modern Classroom’ a set of educational tours for young student travelers to expand their horizons by traveling the world. “Since travel makes a person more knowledgeable, understanding and accommodating, it has for several students, changed their career paths,” says 27 year old Yasin Sharief, who started Travelstall in 2008 as a subsidiary of the company to sell international destinations. He travelled and worked through his college days before he got into the family business. Meeting the soft spoken Mahaboobulla Khan, 42, in 2012, was indeed a boon for Yasin. Bringing his vast experience in the travel field for years, Mahaboobulla added his sage’s wisdom to Yasin’s energetic dynamism. They became partners at Travelstall and together have been handling the “Modern Classroom” concept. The Modern Classroom puts together travel itineraries abroad for Indian schools to help students learn from hands on experiences.
Beginning with the Presidency School, followed by the Delhi Public School and Cambridge Public School, Yasin and Mahaboobulla have not just been travel planners for over 400 students in the age group of 11 to 17, but also compassionate care takers and guardians to the kids on their travels. A tour of the USA with the Kennedy Space Centre (KSC) has been a big hit with the school kids who signed on to the Modern Classroom program.
Guided by Yasin’s father Salim Shariff who provided the right contacts to him in the initial stages of setting up Travelstall, the business partnership of Yasin and Mahaboobulla can be a guiding example to many youngsters in the community about how to work professionally and give the best to the customers!
(For more insight
www.facebook.com/travelstall Email: [email protected] Website: www.travelstall.com (Yasin Sharieff, 9886753632). Travelstall ,9/1 Cunningham Road Commerce House Building Flat # G 1-A, Bangalore -560052)