A SYSTEMATIC STUDY OF THE HOLY QUR’ĀN

Islamic Voice 0 May, 2021 2:52 pm
Religion and Science in Harmony
A Powerful Rebuttal of Atheists’ Claims
Tasteful Saga of an Entrepreneur

Some Excerpts and Contents 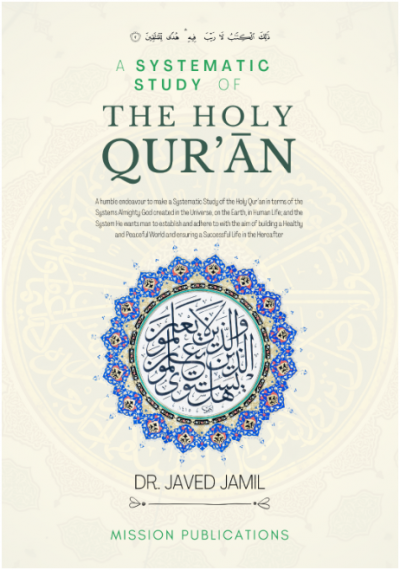 What attracts attention at the very outset was the caption on the cover of the book. The book describes Qur’ān as “a humble endeavour to make a Systematic Study of the Holy Qur’an in terms of the Systems Almighty God created in the Universe, on the Earth, in Human Life, and the System He wants man to establish and adhere to with the aim of building a Healthy and Peaceful World and ensuring a Successful Life in the Hereafter”.This is a categorical confirmation of the fact that, in Qur’ān there are a very large number of verses, which describe the Creation and Functioning of the Universe as a whole and the Functioning of the Earth, including its flora and fauna. There is absolutely no doubt that, if human beings must establish on earth the kind of harmonious functioning existing in the universe, they have no option but to follow God’s injunctions in full.

Qur’ān deals with numerous subjects including the Laws and Structure of the Universe, creation of the Earth and its flora and fauna, the beginning and the end of the Universe, the history of mankind especially related to its rejection or acceptance of the Divine Guidance, the philosophical foundations of the Divine Universal System, and the theological, legal, social, political, economic, moral, and spiritual guidelines for the establishment of Final Phase of Islam. The stories of some of the Prophets and Ambassadors of God and the fate of some of the villains of humanity make it not only absorbing but also more comprehensive. Further, Quran beautifully captures the swings of the on-going revolution, with all its struggles and successes, which started with the communication of the first set of the wondrous verses to Muhammad (SAW), and continued till the communication of the last verses. By that time, the first example of the truly Islamic System was set in order, leaving the continuation and expansion in the hands of the Followers of Islam.Those who are interested in having the book can contact What’s App Number 91-8130340339 or [email protected]