Islamic Voice 0 March, 2015 12:00 am
A Memoir of Travels and Travails
Understanding Synergy Between Religion and Science
Unveiling the Founders’ Fondness for Freedom 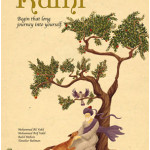