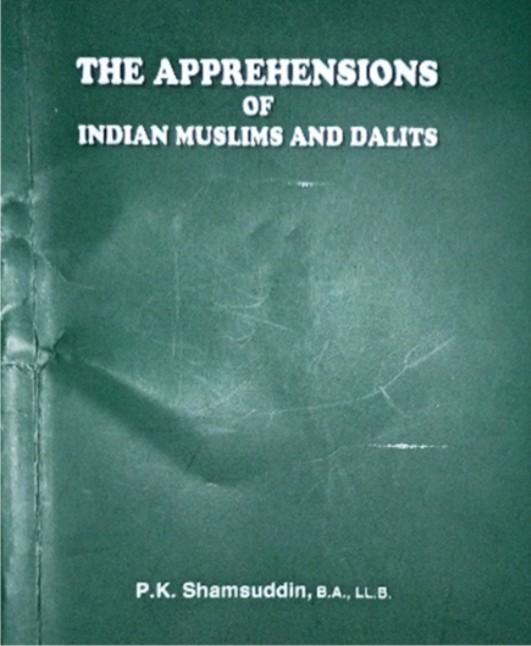 “The Apprehensions of Indian Muslims and Dalits”

Islamic Voice 0 June, 2022 2:56 pm
Talaash: A Search for the True Meaning of Life
Filling the ‘Void’ with Spiritual Intelligence
Manufacturing Fear and Hate 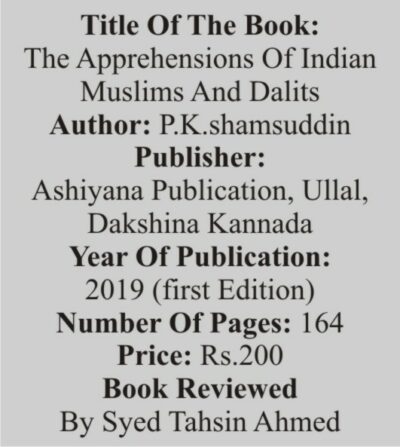 The title of the book “The Apprehensions of Indian Muslims and Dalits” is intriguing, and it leads you to the question: what are those apprehensions? However, to get an answer, you have to detour topics like the conditions of Indian Muslims, the issue of Talaq, the common civil code, changes to Mohammadan law, the past glory of Muslims, and the stand of present-day Muslims on various issues. But this straying from the main topic is also rewarding since the author introspects about the practices of present-day Muslims and in what matters they require a course correction.

For example, a Madrasa student asks his Ustad how the moon grows each day until the full moon and thence reduces its size day by day. The Ustad replies in a loud tone: “It is Allah’s Qudrath.” The student is thus discouraged from having an inquisitive mind and to find scientific reasoning. The author speaks against the practice of Triple Talaq and argues that when the criminal laws of an eye for an eye, hand for hand, or the death penalty for adultery are not applicable for Muslims in India, why the laws of marriage should not be changed?

The author is of the opinion that the interest given by the banks on deposits is not usury. The Holy Qur’an says: “Oh, ye who believe! Devour not usury, doubling and quadrupling (the sum lent)” [Surah al-Imran-130]. Shamsuddin opines that usury is taking a return double or four times the money lent. Banks help the public from the clutches of cruel money lenders, and the Government has control over the banks, and it even varies the interest.

Further, the author says that there were no banks during the Prophet’s (peace be upon him) time, and money-lending Jews were charging high rates of interest. He also calls upon Muslims not to discourage our youth from taking jobs in banks by terming it “haram.” Shamsuddin also speaks out against calling Life Insurance, Insurance of property, and Health Insurance un-Islamic in the absence of any other alternative. Imagine the plight of a person whose shop is gutted in a fire, and he has not insured it because of such beliefs.

The author points out the paradoxes of Muslims wanting modern education for their girls but do not favour co-education; will say acting, singing is un-Islamic but are proud of Dilip Kumar or Naushad; want their children to excel in sports but are against the dress code.

Shamsuddin devotes a few pages to highlighting the achievements of Muslim men and women in Islamic history. He touches upon the Babri Masjid issue and is of the opinion that Muslims should concede to the demand for shifting the mosque as a gesture of goodwill. However, this issue is now infructuous. The author quotes many passages from the book “Bunch of Thoughts” written by M. S. Golvalkar, Sar Sanchalak of RSS, highlighting Golwalkar’s anti-Muslim diatribe.

The author takes up the issue of “Onde Matharam” terming it one of the contentious issues between minorities and the Sangh Parivar. “Onde Mataram” slogan is taken from a poem in the novel ‘Ananda Mata’ written by Bankimchandra Chatterji in the Bengali language. According to Shamsuddin, the objection of the Muslims stems from the Islamophobic context in which this slogan is used in the novel. Delving into the nativity of the Hindus and the history of Aryans and Dravidians, the author advances the argument that they have all come from outside.

After many digressions like the past glory of Indian Muslims, the excessive importance given to the Urdu language, family planning among Muslims, beef-eating etc. the author sets out to answer the apprehensions of Indian Muslims and Dalits at the fag end of the book. The lynching of innocent Muslims, arresting Muslims for the crimes which were not committed by them, asking Muslims to prove their citizenship; all these incidents create “apprehensions in the Muslim community of a future larger peril for them to face” The present dispensation wants to “clip their (Muslims) political identity and Muslims should be conscious of all these impending dangers. For this they should debate and figure out a solution”, says the author. His apprehensions arise from the Islamophobic views of M.S. Golwalkar and, since the present dispensation, upholds such beliefs. The apprehensions for Dalits, according to the author, are that if India becomes a Hindu Rashtra and Manusmriti becomes a law, Dalits will face disparity and injustice as they could be treated as Shudras.

It was expected that the author would employ an incisive approach by delving into the apprehensions individually and examining how they can be dealt with, what measures are suggested, who should take the responsibility, what should be the approach, what are the advantages of such actions, what are the economic and political ramifications and then suggest a road map. But the book merely warns the Muslims and Dalits about the perceived dangers.

The author adopts an expressive, breezy, and candid writing style and takes the reader along throughout his narrative. Shamsuddin has painstakingly culled out information and facts from various sources, and this makes the book quite interesting to read and informative. You will also come across many rare snippets, such as the information that Swami Vivekananda was a meat-eater. The book’s printing is good, but the cover page could have been more attractive.

Quite an enlightening and thought-provoking book. But the author could have remained focussed on the core issue by linking the many related issues spread over the book with the perceived apprehensions.