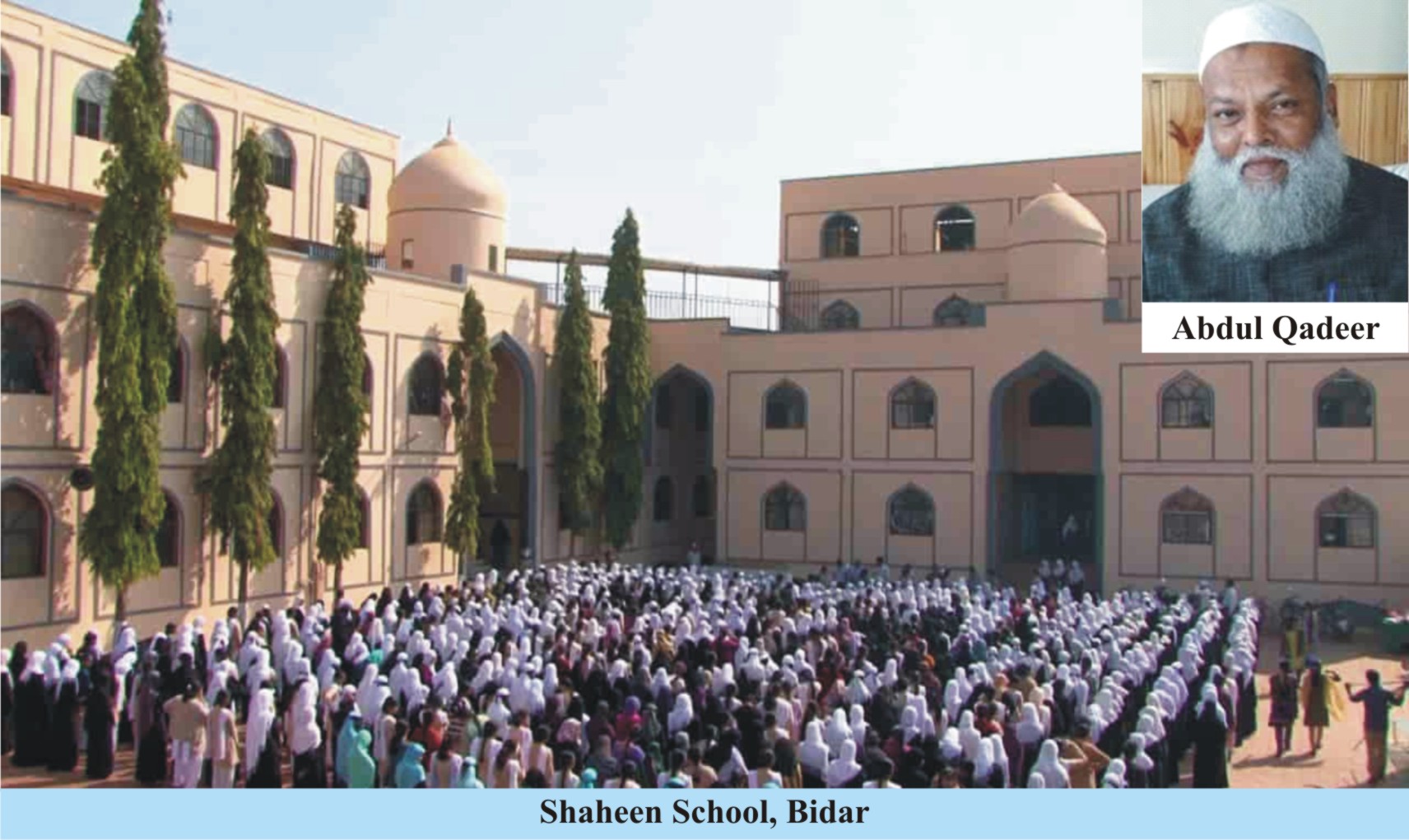 A Madrasa that Promises Both Heaven and Earth

The South Indian city of Bidar the northernmost part of Karnataka, 145 km from Hyderabad is barely known beyond the subcontinent. But in recent years, it has built a great reputation in the field of education. It is drawing students from miles around, and the teaching pedagogy at its largest seminary (madrasa) that is delivering amazing outcomes has confounded educationists. The madrasa is not just opening the gateway to modern careers but also strengthening the prospects of eternal salvation.

In a narrow alleyway, opposite the 15th-century edifice of Madras, a of Mahmud Gawan (1472) in the GoleKhana area of Bidar stands Shaheen School, the flagship institution of a vibrant educational revolution whose ripples are touching thousands of lives across the country. Parents seeking a blend of temporal and spiritual education are choosing it over mainstream institutions. It offers a bridge course for madrasa pass outs and enables them to join the mainstream education system.

When Abdul Qadeer, an engineer by profession, began his enterprise in a one-room tenement accommodating 18 students way back in 1989 he never imagined that his effort would becomea harbinger of a unique educational revolution. With a missionto “shape an ideal seat of learning that is accessible to one and allthe movement has mushroomed into a major center of academic excellence and a beacon of modern learning .,touching the lives of more than 11000 students supervised by 400 teachers, all of them engaged in the creation of knowledge wealth. The network comprisesnine schools, 16 pre-university colleges, and a degree college having its clones in several cities. It has turned more than 900 students into doctors in the last 15 years.

Muslims desperately need such institutions. they comprise14% of India’s population but have the highest illiteracy rate (42.7%), the lowest level of enrolment in higher education (4.4%) the lowest share of public (or any formal) jobs, school and university posts including that of government jobs (4.9 %), earn less than other groups, are more excluded from the financial world, and spent fewer years in school even though. Pitifully Muslims account for 40 percent of India’s prison population.

While the debate over the modernization of madrasas continues, there are several madrasas in India initiating change to bring them in tune with modern times. Some recent reform efforts have focused on modernizing the teachings on offer at madrasas. This modernization includes the introduction of computer proficiency and English language classes which strengthen the employment potential for students outside of the religious sector.

Qadeer is one of the many links in the chain of modern liberal Muslim education that was forged by Sir Syed Ahmad who founded the Aligarh Muslim University.Sir Syed found the madrasa syllabus unsuited to the present age and to the spirit of the time. He criticized it for encouraging memorizing rather than real understanding.

Secular Muslim educationists also tend to agree that curriculums at most madrasas have become fossilized and it cannot be reformed by cosmetic changes, like tweaking a few courses or installing a few computers. They have to be provided with physical and intellectual resources and, most important, cultural temperament to equip their students for the complex demands of a highly competitive modern world.

Madrasas have played an important role in the history of Islamic civilization. They have been powerful nodes in the learning system and have been harbingers of several revolutionary achievements in fields as diverse as jurisprudence, philosophy, astronomy, science, religion, literature, and medicine. It was only when the Golden Age of Islam began to decline that the madrasas lost their academic and intellectual purity, and ceded prime space to western-oriented education.

Qadeer has spent his active life bridging the divide between traditional and modern education. His schools teach secular subjects like science, medicine, technology, social sciences, and history, in addition to classical Islamic texts. Having a realistic frame of mind, he tried to inspire Muslim society toward modern education. Historically, madrasas were institutions of higher learning until their importance diminished with the onset of Western education. On account of Shaheen’s resounding success in medical entrance tests, the college has been attracting students from as far as Canada and the Middle East. Non-Muslim students come in large numbers; Parents value the quality education and appreciate the environment of Shaheen’s campus.

Madrasas and mosques are an important feature of the Muslim community and can reinforce community cohesion and integration. People like Qadeer have presented In Shaheen a model worthy of replication. It is true that more than the model, it is the charisma of inspirational leads like him that infuse institutions with vibrancy. But these madrasas clearly demonstrate that there are silver linings in the educationalhorizon of Muslims. The lesson we must learn is that the community’s own shortcomings cannot be easily palmed off on others.
Madrasas elsewhere should take a leaf out of Shaheen’s book. Since the curriculum and pedagogy they follow were designed for a society far different from ours, these madrasas have lost their vitality and relevance. Accordingly, madrasas need to introduce subjects that can broadenthe minds of students and equip them to understand modern society with all its complexities.This way madrasas can produce able religious leaders and scholars who can comprehend the modern concerns and complex challenges.

Madrasas, like those run by Qadeer, can play a vital role in promoting an intellect that is well equipped to face the challenges of the modern world. Since the students are schooled in classical and modern science as well as secular and religious thought, they are better able to spot scriptural distortions. They also tend to be more connected to their own communities as well as to the mainstream society and their stable sense of identity, religious and otherwise, shields them against radicalism. These madrasas are powerful allies in India’s transition to modernity.

Here is what the founders of Jamia Millia Islamia wrote for its students to sing as the official anthem:

“Here conscience alone is the beacon . . .
It’s the Mecca of many faiths,
Travelling is the credo here, pausing a sacrilege, . . .
Cleaving against currents is the creed here,
The pleasure of arrival lies in countering crosscurrents.
This is the home of my yearnings,
This is the land of my dreams.”
Let this noble thought remain a guiding credo for every Muslim.