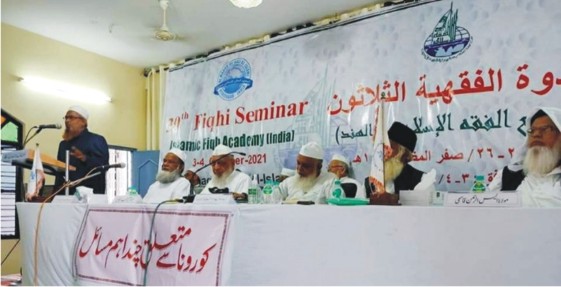 29th Fiqhi Seminar: Not permissible for a Woman to Travel without a Mahram, Madrasa should re-introduce the Astronomy subject

Hyderabad/ Delhi: “Travelling for the obligatory Hajj and Umrah without a Mahram is not permissible in Islam,” declared the Islamic Fiqh Academy of India (IFA) at its 29th Islamic Jurisprudential Seminar held on October2-4 2021 on the campus of the Islamic research institution ‘Al-Mahadul Aali Al-Islami, Hyderabad. This pronouncement on women’s travel has far-reaching ramifications in the face of the Hajj Committee of India’s decision to allow women to go on Hajj without Mahram. Since the Mahram restriction was lifted in 2018, around 3,500 Indian Muslim women, mostly from Kerala, have performed Hajj without “Mahram.”

Fiqhi seminars are one of the most important annual activities of the Delhi-based Fiqh academy, which attracts top Islamic jurists from India and abroad. The academy held 29th and 30th seminars jointly because of the Covid situation in the country. Four and two issues, such as Covid-related problems, use of social media, sighting of the crescent, women traveling without Mahram, etc., were deliberated upon by about 100 distinguished religious scholars, ulema, and jurists and approved dozens of proposals unanimously.

Traveling without Mahram was one of the critical topics of the 29th Seminar. In the light of papers received on the subject and questions raised by the scholars, the academy said traveling sans Mahram by women is a ‘fitnah.’ The Seminar has approved 5-point proposals on this matter.

The Decision on Umrah and Hajj reads:

The bottom line of these proposals is that it is not permissible for a woman to travel without a Mahram, whether the trip is for an act of worship such as Hajj or to visit her parents or a permissible kind of journey for other purposes.

This may trigger a new debate in the country on women’s Hajj journey without Mahram (permissible male companion).

Scholars came out with dozens of proposals on other issues discussed during both seminars.

On the Moon-Sighting Issue:

The Seminar adopted 18 proposals, and some of them are interesting:

Corona has impacted all walks of life, including performing certain forms of worship for the believers.

Some of the important are:

On Buying and Selling of Fruits in Orchards

Another important topic was the principle called sadd-i zari’ah literally blocking the means.

In the inauguration session, Maulana Rabey Hasani Nadwi, president of All India Muslim Personal Law Board, spoke through video conferencing from Lucknow. He exhorted that it is the duty of Ulema and Islamic jurists to solve the new problems arising out of fast-changing developments.

Academy president Maulana Nematullah Azmi, who teaches Hadith and Tafsir in Darul Uloom Deoband, touched upon the ongoing malicious campaign to defame Islam and Muslims in the country. In his presidential address, Nematullah Azmi said we should not dishearten due to the onslaught of the Hindutva forces, and we should keep faith in the Almighty Allah as things will be better soon. It is mere propaganda against Islam and Muslims, and it will evaporate like a water bubble, but we need to spread the true message of Islam by words and dee ds, he added.

Delivering a keynote address, Maulana Khalid Saifullah Rahmani, IFA’s general secretary, expressed regret over the postponement of the Seminarto be held at Darul Uloom Waqf Deoband due to pandemic induced lockdown. He also spoke about the construction of a 2-story building Darul-e-Tarbeeton the campus of Al-Mahadul Aali Al-Islami, Hyderabad. Maulana Rahmani is also the general secretary of this institution.