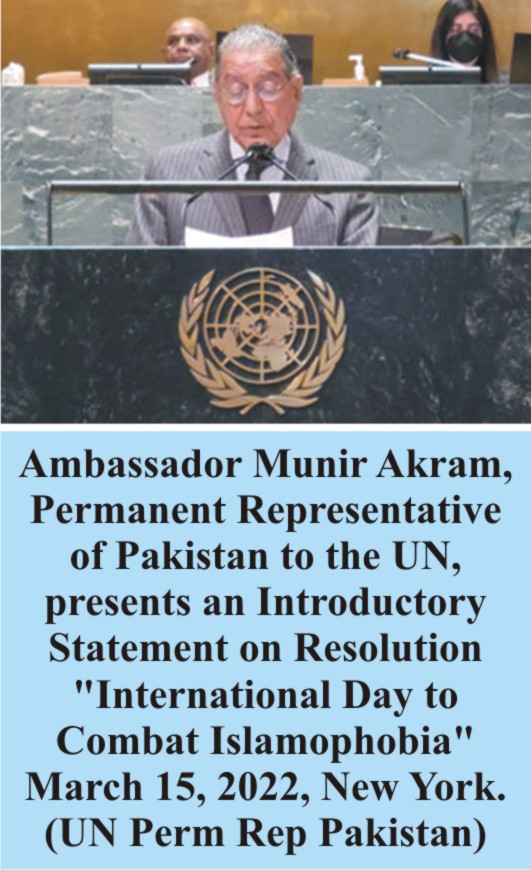 London: The UN has adopted a resolution proposed by the Organization of Islamic Cooperation and Pakistan to designate March 15 the International Day to Combat Islamophobia.

The resolution was adopted two years ago since a right-wing extremist murdered over 50 Muslims in a New Zealand terror attack on two mosques.

The day will be cemented as an annual reminder of the need to combat Islamophobia.

The resolution was introduced on March 15 by Pakistan’s ambassador to the UN, Munir Akram, on behalf of the OIC.

“Islamophobia is a reality. Its manifestations hate speech, discrimination, and violence against Muslims are increasing in several parts of the world,” he said.

“Such acts of discrimination, hostility, and violence towards Muslim individuals and communities constitute grave violations of their human rights and violate their freedom of religion and belief. They also cause great anguish within the Islamic world.”

Akram cited the words of the UN’s special rapporteur on freedom of religion or belief, who said: “Since the 9/11 terrorist attacks, institutional suspicion and fear of Muslims and those perceived to be Muslim has escalated to epidemic proportions.”

Women and girls have often found themselves at the sharp end of this hatred, said Akram, adding: “The gender aspect of Islamophobia is also gaining prominence, with girls and women being targeted due to mode of their dress and the general notion that Muslim women are oppressed and thus must be liberated.”

He warned that Islamophobia is a “poorly understood” phenomenon that often intersects with the anti-immigrant and anti-refugee sentiment.

He said it is “essential” to promote information about this “disturbing global trend” that can reach the very top of governments in many parts of the world.

The adoption of the resolution follows years of discussion about the need for an international day to combat Islamophobia, initiated in Makkah in 2019 following the New Zealand mosque attacks.
At that time, OIC members, including Saudi Arabia, “stressed the necessity to combat hate and fear of Islam and Muslims.” (Source:https://arab.news/9hbd9)