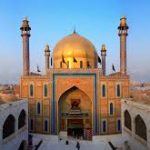 The heinous slaughter of dozens of people at the renowned shrine of the Sufi Lal Shahbaz Qalandar in Sehwan, Sindh (in Pakistan) by a suicide-bomber affiliated to the so-called ‘Islamic State’ is a gruesome reminder of the evil being spread in the name of Islam today by some groups. This is only one of many such attacks by terrorists in the name of Islam. All Muslims must condemn this violence, which is only giving Muslims and Islam a bad name and which has no legitimacy whatsoever in the teachings of Islam, if understood properly. Along with this, Muslims must also condemn the ideology of the so-called ‘Islamic State’, denouncing it as completely anti-Islamic. This ideology is fiercely intolerant of people of other faiths as well as of Muslims who advocate a different interpretation of Islam.
The shrine of Lal Shahbaz Qalandar, like many other Sufi shrines in South Asia, is a place that attracts people of different faiths”Muslims, Hindus and others”as well as Muslims of different sects, Sunnis and Shias. In bringing together people from different religious, sectarian, ethnic and other such backgrounds, the Sufis and their shrines have played a great role, reminding people of the oneness of all humanity despite external differences. This role, which reflects true religiosity, is something that Muslims need to cherish and further promote.
Sufis teach love as the way”love for God and for all humankind and other beings. That, they teach us, is true piety. It was this love of theirs that endeared them to people irrespective of creed and caste and made for their immense popularity. This understanding of religion needs to be promoted today. It is also the only answer to the terror being promoted in the name of Islam.
The cruel and terror-driven misinterpretation of Islam advocated by the likes of the so-called ‘Islamic state’ is a complete distortion of the true message of Islam and is also a menacing danger to world peace. It is as grave a danger to Muslims themselves as to other people.
The carnage at the shrine at Sehwan could be the result of a plan to foment chaos, and this is something that needs to be investigated.
In a world faced with hatred in the name of religion, including by terrorists misusing the name of Islam, the message of the Sufis”of people like Lal Shahbaz Qalandar”has a particular relevance. This message should inspire us to lead our own lives as the Sufis did and to work for our own inner transformation as well as for peace”peace within our selves, between individuals, between communities and between countries.”
“The good deed and the evil deed cannot be equal. Repel evil with that which is better; then indeed, he between whom and you there was enmity, will become as though he was a close friend.” (Quran 41:34)