The Jar of Life

It is up to oneself as to how he uses the time of life gifted to him. 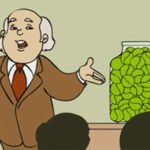 It was Prof. Suleiman’s period. While entering the room, he threw a glance across the students and said, “Today I’ll be imparting an important lesson of life to all of you.”
He had carried a large glass jar into the room. He placed it on the table and began to drop tiny tennis balls into it. He kept dropping the balls till it could take no more. He asked the students if the jar was full. The students replied in unison: “Yes, Sir!”
Now, Prof. Suleiman pulled out a polythene bag from his briefcase filled with small pebbles. He began to drop the pebbles into the jar. While dropping them, he was shaking the jar and rotating it on its base. He kept doing this till the pebbles filled up the spaces between the tennis balls. He again asked the students if they felt the jar was full. The students again said: “Yes, Sir!”
Now, Prof. Suleiman took out another bag from his briefcase, which contained sand. He began to pour the sand into the jar. The sand particles trickled into the pores and lodged themselves into the vacant spaces. Prof. Suleiman gently stoked the jar’s base against the table to ensure that the sand particles got into every conceivable space between the balls and the pebbles. He again made the same query. “Is the jar filled to the capacity?”
“Yes, Sir!”, said the students amidst peals of laughter.
Now, Prof. Suleiman took out two bottles of juice from his bag. He began to pour the juice into the jar till the sand and the pebbles absorbed a lot of it. Then, he turned to the students and said, “I’d like to tell you something very serious and important for your life.”
He began to speak.
“Take this jar as your life. The tennis balls are the most important of the tasks of your life”for example, education, livelihood, family, your spouse, job, health and security, and so on. The pebbles represent your wants and desires in life, such as home-help, a car, a cell-phone, a laptop etc. The sand that filled the vacant spaces stands for frivolities, such as pastimes, gossip, chit-chat over the phone and other things that fill the gaps between major assignments.”
“Now suppose you had filled the jar with sand in the first instance, there would have been no space left for tennis balls and the pebbles. Or if you had chosen to fill the jar with pebbles first, there would have been no scope for balls but it may have taken considerable amount of sand.
“The same rule applies to life. If you fill up your life with frivolous things or pursue things that are not significant, you would have no time to take up important tasks of life. If you desire a life that is immensely successful and serene, this is an important lesson. Now it is up to you to decide as to how you would like to fill up the jar of your life.”
The students were listening to Prof. Suleiman in rapt attention. One of them raised his hand in the air to pose a query. “Sir! You explained to us what the balls, pebbles and the sand represent, but those juice bottles remain to be explained.”
Prof. Suleiman smiled and said: “I was just wondering why no one raised this query.”
He continued: “All that it means is that howsoever busy we might be with our daily chores of life and even if we have achieved whatever success we want, we should retain some space and scope for maintaining the sweetness of relationship with others in our lives.”
(Transcribed from Urdu by Maqbool Ahmed Siraj)