The first ever initiative provides exposure to new careers in seven states across the country. 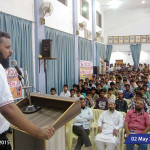 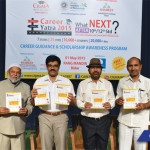 In the first of its kind initiative, a pan-Indian career counseling campaign nicknamed ‘Career Yatra 2015’ was organized connecting 25 cities of the country during the month of May and first week of June to make the Muslim students aware of career opportunities. Organised by Cigma India, a Bengaluru based NGO, it took the noted student counselor Ameen e Mudassar to these cities across seven states stretching from Tamil Nadu to Assam between May 1 and June 3.

20,000 Kms covered
Travelling by train, bus, car, and air, Ameen and co-counselor Shoaib Ahmed covered 20,000 and odd kilometers and addressed 25 programmes that drew students”both boys and girls”as well as their parents. It was sponsored by Shaheen Group of Institutions from Bidar and Bearys Group of developers in Bengaluru. Local sponsors such as Ayesha Bai and Haji Abdul Lateef Charitable Trust, Karnataka Zakat and Charitable Trust and Maulana Azad University chipped in at Mumbai, Mangaluru and Jodhpur respectively. The team from Bengaluru took along other counselors from other places.
Ameen told Islamic Voice that a total of 8,500 students were addressed at these places and a career guide titled After 10th: What Next published by the Cigma India, was gifted to each student. The cities covered were Kolkata and Berhampore (West Bengal), Guwahati and Hojai (both in Assam), Jaipur, Jodhpur, Tonk (all in Rajasthan), Ahmedabad, Modasa, Vadodara, Anand (all in Gujarat); Ballari, Bidar, Mysuru, Belgavi, Vijaypura, Bengaluru, Mangaluru, Kalburgi (all in Karnataka), Nooh (Haryana), and Vaniyambadi (Tamil Nadu).
Ameen said he invariably found high degree of enthusiasm among students to join civil services. He said two kinds of students, those who were high achievers and the ones who had failed face challenges and were confused about the future course of action. ‘This only highlights the need for taking up the students counseling work on an organized basis all across the country by the community’, he asserted. According to Ameen, parents also participated with equal enthusiasm in the counseling sessions.

40 Loco Pilots from ITI
Narrating his experiences, Ameen said a lot of good work is happening around the country to uplift the Muslims educationally. He said the 100-acre campus of Maulana Azad University in Jodhpur was a testimony as to how proactive efforts could bear fruit even in hostile conditions. He said the Maulana Azad ITI of the University has so far produced 40 Loco Pilots for the Indian Railways.
Role Models
In Guwahati, Badruddin Ajmal, AIUDF Member of Parliament representing Dhubri constituency of Assam, advised the counselors’ team to start counseling from 6th standards onwards and make the students aware of three careers a year. The team was joined by the Karnataka Health Minister Mr. U. T. Khader in Mangaluru; Ballari Deputy Commissioner Salahuddin in Ballari; Prof. Jaleel Ahmed Tareen, former vice chancellor of Jammu and Kashmir and Puducherry Universities in Mysuru; social activist Juzar Bandookwala in Vadodara; Mr. Atique Ahmed, Chancellor, Maulana Azad Unviersity in Jodhpur; Mr. Afzal Memon in Ahmedabad; Prof. Rahmathullah of Islamiah College in Vaniyambadi; Dr. P. C. Jaffer, Deputy Commissioner of Bidar district in Bidar; Vikram Jain, Deputy Commissioner in Yadgir district of Karnataka. He said the presence of Asif Iqbal, the first visually challenged graduate from the Indian Institute of Management (IIM) in Kolkata came as a major morale booster. He said students were looking for role models everywhere and such figures must be presented before them wherever possible.
The Cigma India proposes to cover 50 cities next year and expand the ambit of campaign to several more states.
Cigma India can be contacted at: Ameen e Mudassar, CEO, CIGMA, Phone : +91-80-41554225
Mobile : +91-98455 67687 / +91-8050067687, Email : [email protected]