Islamic Voice 0 May, 2017 12:00 am
KBN Institute of Medical Sciences – MD in Pediatrics and Gynaecology
UPSC Results – Civil Services 2018 – 51 Muslims Figure among the Successful Candidates
Three JMI Students get Scholarship to Study in Turkey

A Mysore lad recounts his experiences in an elite British school. 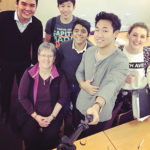 Aous is third from right

Aous Mohammed, 17, is back from England. He studied at the famous Concorde College in Shrewsbury from 9th to 11thstandard. He had been there on a scholarship which came his way through an entrance test and an interview, both online.
Aous hails from Mysuru (previously Mysore) in Karnataka where his father is a businessman. He is now completing his 12th standard at Mysuru and wants to join a Bachelor’s course in Hospitality Management.
The three years in England provided Aous a lot of exposure to an altogether different pattern of education. The Concord College is run by Bell Concord Education Trust and enrolls students aged between 13 and 19. Most of the students are from overseas. They study under IGCSE scheme with focus on academic excellence in order that they get into the best universities of the United Kingdom. For instance, of the 2016 school leavers from Concorde College, 73% joined top 10 universities such as Oxford, Cambridge, Imperial College and King’s College.
According to Aous, at Concord College each class would have 14 to 17 students and there will be several sections of the same class. Most teachers had degrees from Oxford and Cambridge. Teaching provided hands-on experience. For instance, literature will be taught through live plays. In fact, the students were taken to a play based on Khalid Husseini’s novel Kite Runner. There was no study of Art. It was taught through practical classes. Even if you designed a dress or took a photograph, it will be deemed a piece of Art. In history class, the students will be given different sources of history and will be asked to argue their merits and demerits.
Rote learning (memorization) was never encouraged. Students will be asked to analyse and do research. Aous was asked to investigate as to how many people from different destinations used what kind of vehicles to come to a part of the Shrewsbury town. It was part of a survey under a Geography class to understand the economic links of the town. Teaching Geography included use of maps, textbooks and surveys. Most teachers came prepared with their own notes. He remembers the Chemistry teacher never used the textbook. All students had their own separate blocks in the laboratory.
Aous maintains friendship with several of his classmates who have joined different universities and hopes to visit the College as its alumnus in future.